Ashley Cole has said that Arsenal are ‘my club’ making his treatment at the hands of Arsenal fans even harder to take.

Looking back it’s hard not to see an element of racism running through the way Ashley Cole’s departure from Arsenal was handled, if not by fans then certainly from the media who helped shape opinion of the defender.

It is a story that will still be told in 50 years and no Arsenal fan, no matter their age, is ignorant of Cole’s quotes about the offer he received from Arsenal that ultimately resulted in him leaving for Chelsea.

Returning to England to sign for Frank Lampard at Derby County, Cole has been on media duties all weekend and in an interview with Sky Sports revealed that he is still an Arsenal fan despite everything that has gone on.

“I was young, stupid and naïve, but it felt like something I had to do,” Cole said.

“Maybe I should have talked to a number of people back then, while I was quiet, I was a bit of a hot-head and did not realise what I was doing, but I did not regret it afterwards, something that had to happen.

“It hurts because it’s not my fault, I did not leave for nothing, it’s not that I went to Arsène Wenger and said, ‘I want to leave.’

“These things happen in football, you see that. Also with other players, I have gone further and finally, it still hurts a bit, because Arsenal is my club and I played there from the age of 9. To get such strong feelings from the fans, it remains difficult.”

Back in 2015, Paul Williams wondered if it was time to forgive Ashley Cole. You can read that argument below…

I know that for many of you, the name Ashley Cole opens up in your heart a black hole. 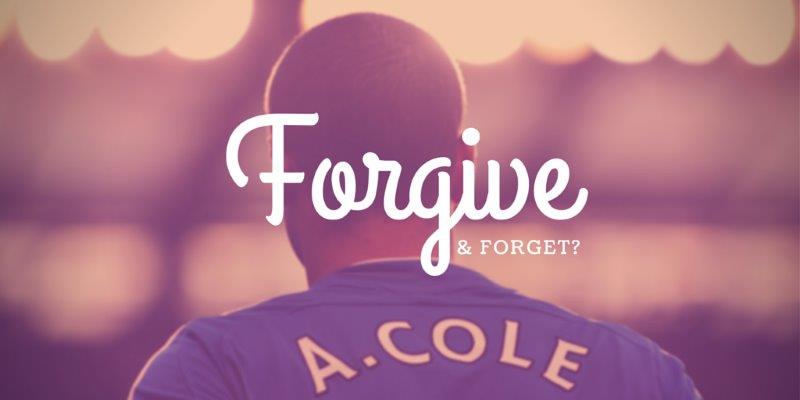 I realise that this man, a brilliant footballer, betrayed every single Arsenal fan out there by meeting Chelsea officials just a few months after the Arsenal had completed their unbeaten season.

Lastly, I realise that a man being left “trembling with anger” having been offered wages of £55,000 per week is perhaps not a man deserving of too much sympathy.

But I think, now, despite the- sometimes disgusting- chants; despite the £20 notes with Cole’s face on them, despite the enmity that has existed between us and Cole ever since his 2006 move to Chelsea, it may be time to reassess this situation.

Of course, it’s a lot easier to say this now that Cole no longer plies his trade for the south west London hatefuls, but that fact isn’t the motivation for this article.

The motivation comes more from the fact that in all of the rightful celebration of Arsenal’s incredible achievement of 2004, Ashley Cole has been effectively airbrushed out of the picture and I don’t think that’s right.

Music analogy: Terry Chimes may not have been best mates with Joe Strummer, Topper Headon and Mick Jones, but his part in helping to make the first Clash album has never been ignored. Ok, so they may have referred to him as Tory Crimes on the album cover, but at least he’s been mentioned.

As for Ashley Cole- actually, I’ve just gone to have a look at his Twitter to check something he said the other day and found out that I’ve been blocked by him. This is a first for me, I haven’t even been blocked by Tancredi Palmer (yet). Was it something I said, Ashley?

Ashley Cole has chosen to remove himself from celebrations of an event he was a huge part of.

Whether it was Amy Lawrence’s magnificent book, Invincible, or the documentary Sky Sports screened after the Monaco first leg, Cole is Banquo’s Ghost (just for you, that one Helen).

Apparently, he made that decision himself as he felt Arsenal fans wouldn’t enjoy hearing from him on the subject of the Invincibles and I think this is a crying shame (perhaps it was the expression of that opinion which resulted in me being blocked).

Perhaps hearing from the man who once nearly crashed his car on learning about a proposed pay rise, may not be essential for everyone but I’m sure he has a story to tell and I would very much like to have heard it.

After all, it was Ashley’s last minute winner against Dinamo Kiev on Guy Fawkes night, 2003, which prevented early elimination from the Champions League. Okay, early elimination would have spared us the heartbreaking quarter-final a few months later, but who knows how important that diving header was at the time? I think it was massively important, a shot in the arm for a team struggling with the demands of European competition.

Even if that goal actually doesn’t have the significance that I think it does, then Ashley still was so obviously proud to be part of that first team, you can see it in the interviews from that time.

He was right to feel so proud, a young kid, an Arsenal kid, coming up through the ranks and prospering in, not just any Arsenal team, but THAT Arsenal team.

How proud would you feel?

I think the club knew the importance of that connection too.

Is it a coincidence that the picture chosen for the final Arsenal programme of the 2001/02 season features Cole and Sol together in ecstasy rather than the famous image of Kanu and Wiltord celebrating the latter’s title-winning goal? I don’t think so.

I do think it’s ironic, though, that Ashley Cole would leave Arsenal in not dissimilar circumstances that saw the former Tottenham captain join us.

Did the Arsenal board try and lowball a player they felt would stay at the club, whatever they offered, because of that connection?

Don’t get me wrong, £55,000 is a lot of money. I’d be happy with that a year, never mind a week, but we all know footballers live in a different world to the rest of us. Why should this supremely talented left back have been any different?

If it’s true that he was promised one thing and then offered another- yes, boo hoo- then that never sat well with me.

Observing our transfer dealings, particularly the failed ones, down the years it seems that Arsenal made a mistake with Ashley Cole that they took a very, very long time to learn from.

Maybe, probably, it was influenced by the lack of cash around as we moved from Highbury.

As far as I’m concerned, it certainly casts Cole’s estrangement from Arsenal in a much kinder light, particularly when you hear former captain Patrick Vieira say that he tried to fight for Ashley to get the pay rise he felt the left back deserved.

If Vieira, an immigrant in north London, could grasp the significance of not giving Cole- in Vieira’s eyes, a potential captain of Arsenal– the right pay rise, then it strikes you as odd that David Dein and co didn’t. Perhaps the board felt that Cole could easily be replaced, after all, he was only a left back and that Gael Clichy looked quite a player, didn’t he?

I wonder if Cole would have got what he wanted had he been a central midfielder, or a centre forward, rather than “only” a left back.

I think time has proved the (lack of) wisdom in that decision.

Chelsea gained a world class player at the peak of his powers and I am left feeling that, as with Patrick Vieira, Arsenal lost a player that they’ve never really replaced properly.

Whatever the reasons, I think it’s time we put the bitterness aside, if we can, and recognise just how important Ashley Cole was to that great Arsenal team.