With no first team game due to the Christmas break, I attended the Academy game to watch them face Bristol City at Thame Utd.

It was quite a trek to get there. Two tubes, one train and then a bus ride.

Thankfully, the youngsters won the game 2-0 and, annoyingly enough, have the same problems as both the men’s and women’s first teams with many injuries to contend with.

Silvana Flores scored the opening goal. I am not sure who scored the second and Arsenal.com have no record of the match even taking place (so much for the men and women being treated equally – ed.)

With this being my first Academy game this season and with no team sheet available, I was unable to recognise the whole of our available 11.

The England u19 manager, Rehanne Skinner, was in attendance seated in the press box, five yards away from me. She was certainly scouting players as they have a friendly in January against Norway to be played in Portugal.

As Rehanne Skinner was in attendance yesterday at the Bristol v Arsenal Academy game, it's interesting to note that the England U-19 team will play Norway in a January. pic.twitter.com/yVnvIgNbLm

Sunday’s win means the Academy team climbed up the table to the fifth place. The youngsters trail Reading by 10 points but have five games in hand. 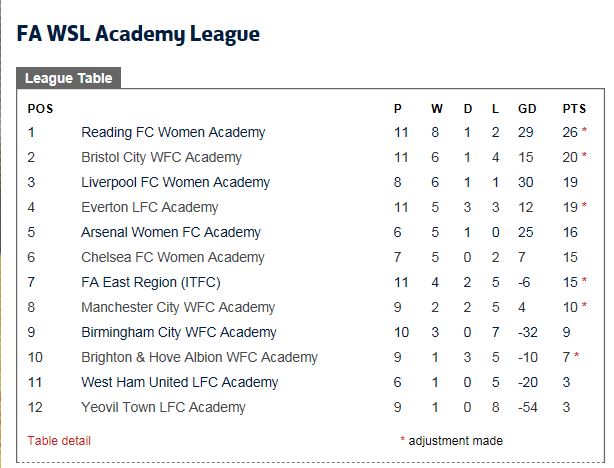 With the current first-team injury woes, Joe Montemurro has given many opportunities to the youngsters, probably more than he was planning to before the season started.

8️⃣ academy stars have made their first-team debuts this season 🔥#WeAreTheArsenal pic.twitter.com/ckyUJhAFgE

As usual with youngsters from the Academy, the big question is can they step up to the first-team level quickly enough to make a contribution and stay in the managers’ plans?

There is no doubt that the first team is short of players and the signing of Danish defender Janni Arnth is a clear sign that the club wants more ready-made players in their title hunt. Joe Montemurro also hinted at one more signing in a recent interview with Tim Stillman.

So where does this leave the young Academy players in term of first-team opportunities for the second half of the season? There will limited chances, no doubt about it. As soon as the senior players come back from their injury problems, they will be back in the match-day squad.

It is the eternal dilemma of giving youth a chance in a competitive environment, as has happened in the last month, and building for the future or purchasing quality, international players to make sure the short-term results are positive.

There is no doubt that the gap between the first team and Academy level is huge in terms of speed, intensity and tactical work as revealed by Joe in his Millwall post match views.

“They can get used to an intensity of football that’s different,” he said while adding there are a lot of things that have to be learnt to reach first team level and the youngsters are on the path to reaching that goal in the future.

“It’s been a real pleasure to work with them,” he added. “We’re trying to make them understand positional play and the importance of positioning without the ball – and it was nice to see them display that.”

So, the future is bright, but first-team opportunities might be restricted in the coming months.

Arsenal hammer Manchester City to go top of the league

Tobin Heath: I never thought I’d play for Arsenal, the club I love