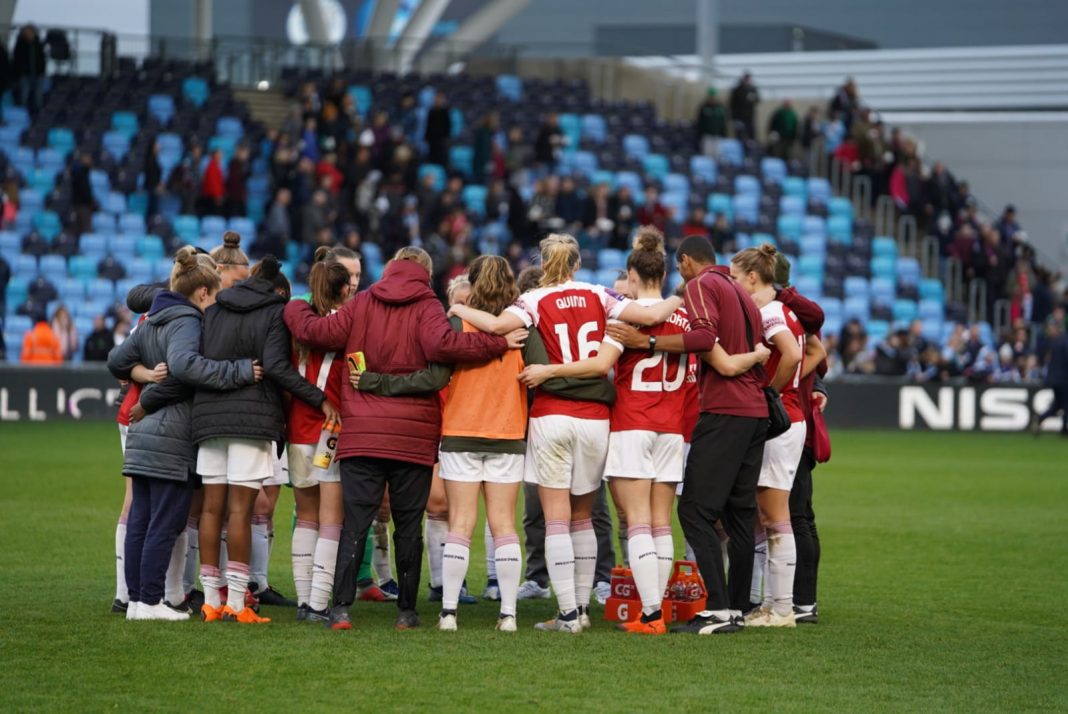 Arsenal’s impressive season-long winning streak came to a cruel end at Manchester City on Sunday as they lost, rather harshly, 2-0.

With only four players on the bench last week against Brighton and Hove Albion due to injury problems and arcane FA rules about academy players, Arsenal could ill afford any more problems ahead of this game.

It was bad enough that Vivianne Miedema was carrying a knock into the match but when the teams were announced, Emma Mitchell was not included in the starting lineup, another injury of course. Teenager Paige Bailey-Gayle was handed her full debut.

No pressure, then, for the 17-year-old who came in on the right, Joe Montemurro moving Dominque Bloodworth to the left. Once again, three more teenagers were named on the bench with only one senior player fit for the bench in goalkeeper, Sari van Veenendaal.

Arsenal set up with a two-person screen in front of their back four, defence on their mind as a priority, but they didn’t just sit back waiting for City to attack, winning the first corner of the game after a cagey start from both sides.

Despite being the home side and needing the points more than Arsenal, City conceded possession to Arsenal for large parts as the sides sparred, both trying to find a way through the other’s setup without exposing themselves.

Arsenal were soon made to pay for their inexperience on the right when Bailey-Gayle gave Lisa Evans no help with a runner. The City player crossed and Georgia Stanway made no mistake from inside the box to open the scoring before 20 minutes were on the clock.

The goal lifted City who took control of the game as Arsenal tried to find a response. They almost did when Katie McCabe hit the bar after great work from Danielle van de Donk won the ball back high up the pitch.

Arsenal came closest again when Beth Mead let one fly from around 35 yards that the City keeper could only tip over, but it was indicative of the areas City were restricting Arsenal to as they controlled the game.

The Gunners emerged from the break like a side that knew what they had to do and almost did it twice within the first three minutes of the second half. Bloodworth almost got on the end of a freekick to the back post while Miedema’s finishing unexpectedly let her down a minute later.

A careless pass from City played McCabe in who found Miedema baring down on goal with acres of space, but unusual hesitation from the Dutch forward allowed City to get back and close her down.

City’s second, when it came, was both cruel and undeserved although Montemurro will be bitterly disappointed with the way his defence allowed Stanway to waltz around them.

Miedema’s frustration grew as the game wore on, urging her teammates higher up the pitch around her but City managed the final quarter of the game well.

In the end, the result is not the worst thing in the world and the performance was not reflected in the final score for Arsenal. They need to ensure that this defeat does not fester and affect their confidence going forward. They are still top and three clear of City and it is all there to play for despite this first defeat in 15 games.

Another mention has to be made (and yes, I am going to do this until it is changed) about the way the games are scheduled. Overlapping Arsenal’s women v Manchester City with the men’s game against Tottenham is just the height of ridiculousness.

How the authorities can do this week after week and then, with a straight face, claim they are serious about making the women’s game a success is beyond my limited brain.

Not only did that game overlap but the women’s Merseyside derby, that was so hyped when it involved men, wasn’t even shown on TV. Fans had to make do with radio coverage if they weren’t already watching the Chelsea men’s match that was on at the same time.

I’m sure this amount of coverage is still too much for a man like Martin Samuel who has already been complaining that the Super League doesn’t deserve the (pathetic) coverage it currently gets because it isn’t, in his gammon opinion, not ‘super’ enough.

14 Arsenal goals in 2 wins and 1 draw this weekend

Continental Cup preview: Which teams can qualify for the knock-out stages?