Shkodran Mustafi’s future as an Arsenal player is still in some doubt after it was reported that Galatasaray are interested in signing the Arsenal defender.

While selling Mustafi would have made sense before the club allowed Calum Chambers to leave for Fulham on loan for the season, letting him go now without bringing in a replacement would be negligent in the extreme. That doesn’t seem to be the plan, however, with rumours around Arsenal buying Domagoj Vida refusing to die down.

Arsenal paid £36.9m for Mustafi just two seasons ago but it’s safe to say he has not really convinced anyone he is worth that price tag.

A move to Gala would see his market value cut significantly but it is unlikely that the Turks will be willing (or able) to pay anything close to what Arsenal want. Should a deal go through I expect it to be more like a loan with an option. That, however, has already been refused by Arsenal who reportedly want €25m for the German.

The most Gala have ever shelled out for a player was £15.35m when they paid that amount to Porto for Jardel. The most they have ever paid for a defender is £6.75m (centreback, Maicon from Sao Paulo). Mustafi is valued at £22.5m, exactly what the club are said to be asking for which makes me wonder if Transfermrkt is where the Turkish reporter plucked Arsenal’s valuation from.

The transfer window closes in England for incomings on Thursday at 5pm. While it is possible that Arsenal could sell players after that date, they would not be able to replace anyone.

Lee Dixon once claimed Gary Neville told him he couldn’t even give Shkodran Mustafi away when he was manager of Valencia, before Arsenal spent £36m on the defender.

Dixon was speaking at March’s Arsenal Supporters’ Trust AGM, and was very critical of a number of aspects of the club. One of those was player recruitment, and, particularly, the signing of Mustafi.

“Don’t get me started on him”, Dixon said.

“But Mustafi? I spoke to Gary Neville who said Valencia couldn’t give him away.

It’s hard to defend Mustafi much at the moment. 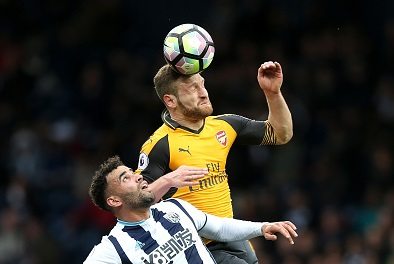 The defender consistently pushes up on attackers to try and win the ball back quickly. As a result, his numbers for interceptions are always high, but it’s a risky defensive tactic. It works okay if opposition forwards aren’t expecting it, but when you play the likes of City, they just abuse the space you leave behind.

The German needs to do a lot more to prove his worth at the club and reportedly also needs to stop blaming everyone else for mistakes instead of looking at his own performance.