Arsenal fans may not like Stan Kroenke, but it seems we haven’t even had a small taste of the anger he’s capable of inducing, a rage so visceral some people would rather be Spurs fans…

The Amsterdam Tavern stands next to a vacant lot in St. Louis, but for the city’s football supporters, it’s the place to be. 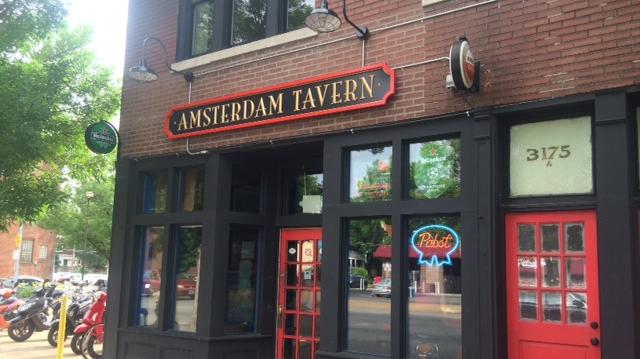 Its black and red ‘Dam exterior, reminiscent of Manchester United, opens up to a world of football as you are greeted by shirts from around the globe. It is here that St Louis’ Arsenal fans come to watch matches, even if that means being here before breakfast for English lunchtime kick-offs.

Fans of all clubs watch their matches here but a noticeable trend is developing – more Spurs fans are emerging.

The reasoning is simple and has nothing to do with a personal preference for Tottenham over Arsenal. It’s all to do with the city’s hatred for the Arsenal owner, Stan Kroenke.

The people in St Louis don’t care that the value of the Rams has doubled since Kroenke moved them to LA any more than Arsenal fans would care about the value of the club if he moved Arsenal to Athens, a comparable distance between the Rams former home and their new one. For Rams fans, Kroenke is enemy number one and if that means actively supporting the rivals of any of his teams, that’s what they are going to do.

It’s hard to blame them.

They watched Kroenke hold St Louis to ransom before upending the team, moving it over 1,800 miles away to a tax-payer funded stadium that removed the cheapest seats to fit in more corporate boxes. The poorest people, who are helping to pay for his mega stadium through their taxes that could go to schools or transport or healthcare, are priced out of attending games at the new complex.

It’s unlikely that Kroenke will move Arsenal. That sort of thing just doesn’t happen in England. Besides, where better than London to be, at least pre-Brexit? But the way he does business, the power he is willing to wield over local councils to extract public funding that is desperately needed elsewhere, should serve as a warning not just to Arsenal fans but to the whole of football in England – this is where we are heading. This is the American sports ownership model and it is firmly embedded in the Premier League now. It’s not just Kroenke who has form in this area, Manchester United’s owners, the Glazers, wrote the playbook on how to extract public money for private profit. There are five American owners in the Premier League now.

Arsenal funded the building of the Emirates through sponsorship deals and loans. Unlike Tottenham, they did not try to take any public money. It’s likely that the stadium will be expanded and upgraded at some point in the not-too-distant future and while the previous shareholders had the foresight to protect the club from being loaded with buy-out debt the way Manchester United was so shackled, I’m not sure they would have anticipated this sort of business practice.

By exacting money from local councils, billionaire sports owners are loading a lot of the risk of stadium development on to the government while they privatise the profits for themselves. Government intervention is desperately needed to stop this sort of thing becoming a regular feature of football in England but it’s hard to see that happening, especially with a Tory government that has allegedly shown itself willing to turn a blind eye to up to 14 murders on UK soil to stay sweet with Russia and its Oligarchs.

“I detest how Stan Kroenke is affecting my life,” says an Amsterdam Tavern regular, identified only as ‘Mike’ in James’s Montague’s excellent ‘The Billionaire’s Club’. “Not only with Arsenal but with the Rams in so many ways.

“I hate the lack of control we have over things in the face of this billionaire. There’s loads of Tottenham fans now. Sure, there were a lot of Americans who played for Spurs. That’s is one reason. But the other if you are a St Louisan…well, you’re not going to pick the one with Kroenke. You’ll pick his mortal enemy.”

Louisan Mike has supported Arsenal for 20 years and was speaking in 2015, three years before Stan Kroenke took full control of the club. But he warned this was coming. “It is something a lot of Britons are not familiar with. When the Glazers took over [Manchester United], there was a lot of shock that private stock owners were getting enriched. And that is just America. That is going to be the new future for English football; a lot of private enrichment.

“At least the slave-owning emirates and the mob-tied Russian billionaires spend money on their club to get results,” he joked. “The man ripping apart the fabric of America with Wal-Mart is doing nothing for the team.”

Ah yes. Wal-Mart. The family business of Stan’s wife that he is involved with that took out life insurance policies on its employees where they were the sole beneficiary. This is called ‘Dead Peasants’ Insurance’, a practice they stopped in 2000 because it was ‘costing them money’ according to Florida State University radio but not before they were sued for millions. Here are another 10 reasons Walmart is the worst company in America.

“Despite the Walton family’s apparent championing of small government policies,” Montague writes, “Wal-Mart has famously become a huge recipient of government subsidies, dubbed by critics as ‘Corporate Welfare’: by paying rock-bottom wages to its 1.4 million staff, the state effectively has to subsidise them with food stamps, housing, and other benefits.

“A 2014 report by the political advocacy group Americans for Tax Fairness placed that figure at a staggering $6.2 billion. Wal-Mart’s employment practices became a campaign issue during the 2016 American presidential election primaries, and that perhaps explains why Kroenke backed Clinton [against Trump].”

Many Arsenal fans are mourning the loss of the club as an entity that was answerable to them, but the truth is that day came and went a long time ago. Stan Kroenke entered Arsenal’s universe seven years ago and this was always his endgame. As it tends to, greed won out over sentimentality for the Arsenal board who were meant to be custodians of the club. It turns out they were only human.

As Montague and Mike both point out, there are no good guys anymore. “It is either an emirate or a dodgy Russian former Soviet-enriched billionaire.

“Which way do you want to be ethically compromised?”

Welcome to modern football, Arsenal. We’ve been waiting on you.