Sunday’s edition of L’Equipe has described Alexandre Lacazette as the ‘new Giroud’ after his poor 25-minute performance against Tottenham.

L’Equipe, along with the rest of the world, weren’t too impressed with Laca’s anxious display against Spurs.

The 26-year-old started on the bench behind new striker Pierre-Emerick Aubameyang and came on with 25 minutes to spare when Spurs were 1-0 up.

Unfortunately, he fluffed the two chances that fell to him; one he volleyed over the bar and the other rolled past the post.

Laca’s lack of composure in front of goal has started to raise questions about whether he’s not the striker Arsenal fans thought he was when he first moved to north London for a club record fee of £52m seven months ago.

Many, including L’Equipe, even suspect he could be the next Olivier Giroud – Arsenal’s back-up striker. The man who’s shoved onto the pitch when Arsene Wenger’s first choice goalscorer gets a bit leggy or gets the nod for cup games so the ‘real’ striker can have a rest. 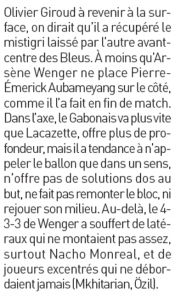 “The Gabon international (Aubameyang) is faster than Lacazette and offers more depth,” the French outlet explains.

But they also acknowledge that the former Dortmund striker isn’t as good with his back to goal and often isn’t prepared to help defend, which are attributes Laca does possess.

What people are forgetting though, is that Laca is on a completely different planet to Giroud in terms of ability. Even though he missed two goals during his 25-minute cameo on Saturday, at least he created the chances.

Until then, Arsenal had only three shots over the course of the entire game.

The finishing – or lack of – is a matter of confidence. And this is an issue in itself. But I definitely think Arsenal fans and the media are being far too quick to judge a striker, who’s just played through his first winter in a new league, and has struggled to get a full match since he joined.

Is Laca destined to be the ‘next Giroud’ – Arsenal’s back-up to Aubameyang? I don’t think so, I believe he has far more to offer.

Whether he can do so under Wenger is the problem.