Mesut Ozil and his fiance Amine Gulse decided to fly back to the Turkish model and actress’s hometown over the weekend.

Both Mesut and Amine shared a sweet picture of the two love-birds in Istanbul, where the former Miss Turkey used to live, via their Instagram stories on Sunday.

The playmaker also shared a snap on his official Instagram page and added the caption, “Mutluluk sebebim” which translates to “I am blessed” in Turkish. 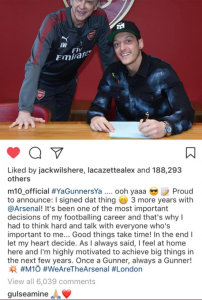 After an exciting week and emphatic 5-1 victory over Everton on Saturday evening, Arsene Wenger obviously agreed to give the German a break.

The 29-year-old signed a new three-year deal with the Gunners on Thursday after months of speculation over his future.

Amine seems to support Mesut’s decision to stay at Arsenal.

The 24-year-old commented a prayer and heart emoji on the midfielder’s announcement post on Instagram and, according to Telegrafi, she’s even moved into his £10m north London home.

Bild recently revealed that Mesut and Amine will get married this summer after the World Cup in Russia.

It’s good to see both looking happy and relaxed during their mini-break in Turkey.

Presumably, Mesut will be back in training very soon ahead of Arsenal’s trip to their second home, Wembley, to face Tottenham on Saturday.