An eye-opening piece from Sam Wallace for the Daily Telegraph has lifted the lid on Pierre-Emerick Aubameyang, his career before he became one of the best strikers in Europe, and following in his father’s footsteps.

The Daily Telegraph recently visited Etoile Lavalloise futsal club in Laval, western France – Aubameyang’s youth team where the striker started his career, and spoke to his former coaches about what the controversial star is actually like in person.

Interestingly, the Gabon international wasn’t actually a striker when the French side first signed him.

“Pierre had come from Gabon to Paris and it was there that we spotted him. He was a box-to-box midfielder,” said Bernard Mottais, a coach at ASL L’huisserie. “He trained with the reserves for six months and went into the first team.”

Aubameyang’s father, Pierre, also known as Yaya, was a footballer as well. The 52-year-old, who’s now a scout for his son’s former team AC Milan, was a defender. He too played for Laval between 1984-1991, when the team were in France’s top flight, and went on to sign for Le Havre, then Toulouse.

“We have a saying here that dogs don’t give birth to cats,” says Alain Guinoiseau, who helped run Aubameyang’s first junior team. “With the blood of his father, he was always going to be a player. The club started accepting boys at six years old, but Pierre-emerick was five when he joined us. We took him early because his father was such a good player.”

Contrary to the troublemaker the German media tried to paint Aubameyang as when he was trying to force a move from Dortmund to Arsenal in January, Wallace’s piece tells the story of a family-orientated, warm individual, who hasn’t forgot where he came from.

In fact, last year, Aubameyang visited the hall in which he used to train, wearing a gold suit, and he had a house built for his mother and grandparents, who he lived with when he first joined Laval in 1995, in a nearby village. 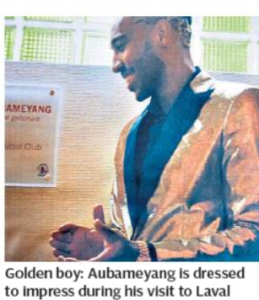 “Yet for all his travels, he regards Laval as home and comes back often,” Wallace explains.

“When he comes back he had got the cars and the look, but he’s a nice guy,” says Alain Guinoiseau.

“He says hello to everyone, he doesn’t think he is above anybody. He seems to like coming back here and playing football with his old friends who still live in the area. We want him to play for L’huisserie veterans’ team when he retires.”

The overall message from Wallace’s piece is refreshing and the complete antithesis of Sami Mokbel’s article for the Daily Mail in which he branded Aubameyang a “flash showman” and painted the striker as some sort of villain.

Obviously, Aubameyang isn’t an angel. He has a pretty considerable list of scandals and definitely doesn’t seem to be afraid of ruffling a few feathers. But, away from the camera, he seems like a family man who respects his roots.

His heart seems to be in the right place.

Hopefully, he doesn’t make me regret my words.