The unique design is of the anime’s main character, Goku, standing there looking like a boss.

Just in case you’re unfamiliar with the world of anime, Dragon Ball Z is an immensely popular Japanese animated series, which the 29-year-old is presumably a fan of. 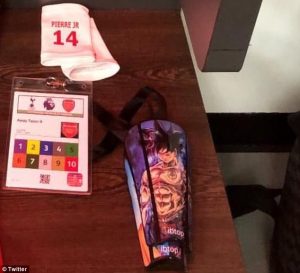 He may be a grown up (whatever that is) but I know a few adults – my own brother included – who are fans of the series.

Alternatively, Aubameyang has two young sons with girlfriend Alysha Behague so perhaps the shin pads are a nod to his kids.

The Gabon international doesn’t seem to take life too seriously. He’s demonstrated that with his famous Batman goal celebrations and quirky fashion sense, so the chances are, he’s just watched the cartoon with his family and thought the main character would look cool on his shin-pads.

He’s already know for customising his clothing, football gear and hairstyle so it makes sense.