Despite picking up a hamstring injury late on, Evans played the full 90 minutes of West Brom’s 3-2 FA Cup win over Liverpool on Saturday as they were out of subs.

The fact that the 30-year-old appeared to limp off and didn’t leave the pitch on a stretcher, unlike Lukas Podolski for Arsenal in 2013, suggests the hamstring problem isn’t too serious.

However, during these early stages it’s hard to tell and Pardew reckons it could affect a potential move this month.

“Jonny is being approached by big clubs,” he told BT Sport. “As yet, we haven’t got an offer that’s right for a player of his quality, which he showed tonight.

“He was playing with what looked like a hamstring [injury]. We’ll have to wait and see but that might affect that decision.

“That’s what the window is about – it’s a moving feast and you have to react.” 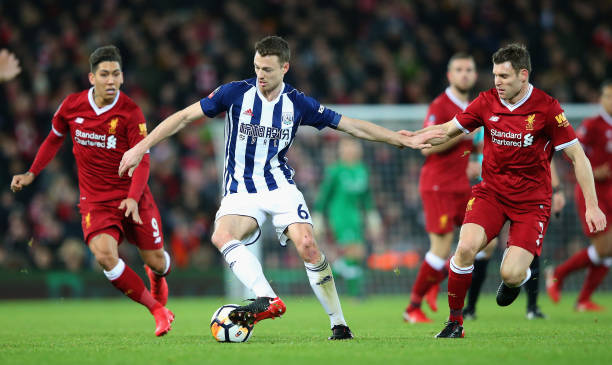 Evans has been heavily linked with Manchester City and Arsenal since the summer.

Both needed defensive options and the Northern Ireland international is out of contract next summer. City are set to splash out a club-record £57m on Aymeric Laporte from Athletic Bilbao, however, leaving the path clear for the Gunners if they can find an agreement.

The Baggies are said to be demanding £25m. The Gunners were reportedly willing to offer £10m plus Mathieu Debuchy but rumour has it that West Brom want cash to buy a forward, possibly Troy Deeney.

Speaking at his press conference before the game, Pardew urged clubs who wanted Evans to get in touch this weekend rather than leaving West Brom with little time to spend the money if they do find an agreement to cash in on their captain.

Given Arsenal’s experience with hamstring injuries, it’s unlikely we would let that stop us from signing Evans..

The grade of the tear would be assessed at his medical anyway.

Grade 1 is a sprain or pull, Grade 2 is a partial tear and Grade 3 is a complete muscle tear.

Poldi’s hamstring injury was Grade 3 and he was sidelined for three months but a Grade 1 pull will only keep the player out of action for around three weeks.

Regardless of the severity of Evans’ potential hamstring injury, Arsenal should be able to deal with it.

Last season, they had 12 hamstring injuries over the course of the campaign. This term, we’re over halfway through and have only suffered four which is a great sign the new people behind the scenes have brought some new magic sponges.