Phil Neville has apologised again for tweets he posted while he was still a player but denies being sexist.

A day after being named as England Women’s manager, Neville was forced to apologise for tweets he sent in 2011 and 2012.

One tweet jokes about ‘battering’ his wife, while others call women hypocrites for wanting equal rights and enforce outdated gender roles in a pretty clumsy fashion. 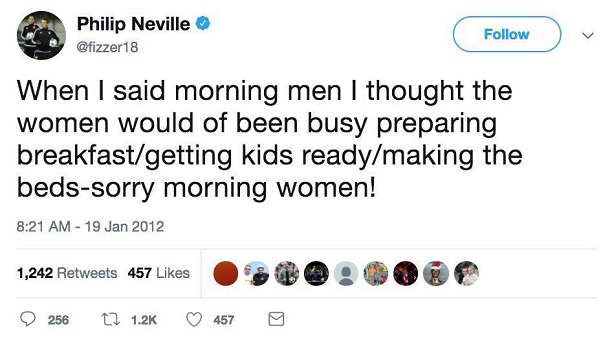 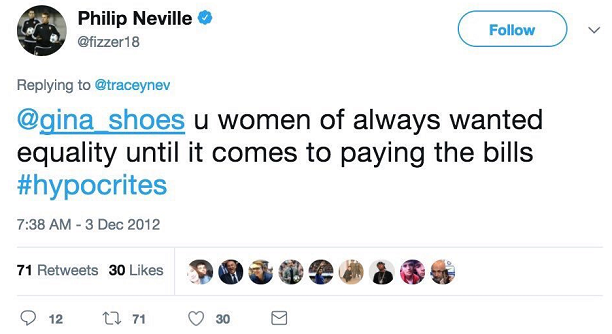 Although the tweets probably were intended as jokes and were made five or six years ago, they once again raise the question of why on earth Neville has been chosen for the England job in the first place.

He’s got absolutely no experience as a first team coach, let alone with women’s football. It’s hard to imagine that the ex-Manchester United defender really was the best candidate for the job.

While the tweets have now been deleted, they were there before. Neville still said and potentially believed those things.

“It was that wording that disappointed me more than any of them because it obviously relates to domestic violence,” the 41-year-old told Sky Sports.

“That tweet wasn’t sent out as a joke to domestic violence. It was in a period when I was on holiday with my wife.

“It relates to something I was doing with my wife in terms of a sporting, competitive nature.

“But it’s not right, the wording of the tweet was not right and I’m disappointed I used that terminology.”

Is it really appropriate for someone who at least once held these sexist views to be given such a prestigious job in charge of the England Women’s team? Or does everyone deserve a second chance if they prove they’ve grown and learned from their mistakes?

Arsenal confirm Patten re-signing: This club means everything to me