The German media have officially waged war on Pierre-Emerick Aubameyang despite talks over his move to Arsenal reportedly stalling.

The Dortmund striker has always been perceived as a ‘character’ since his move from Saint Etienne in 2013.

Special allowances have been made for him by the Bundesliga club, his family are treated like his entourage and, like a lot of footballers, his dad is his agent.

In January, Aubameyang even reportedly got in trouble after allowing his family to take a holiday at Dortmund’s team hotel during a training camp.

However, now the 28-year-old could be signing for Arsenal, the German media aren’t looking upon Aubameyang’s ‘quirks’ as fondly.

In fact, it seems as if they’ve only just realised the Gabon international is a bit of a tool.

Bild, which is basically the German version of the S*n, have pounced on a recent comment made by Aubameyang’s father, also called Pierre, in which ‘Papameyang’ told a journalist “I have the impression that he wants to bring us back to the Hitler era” on social media. 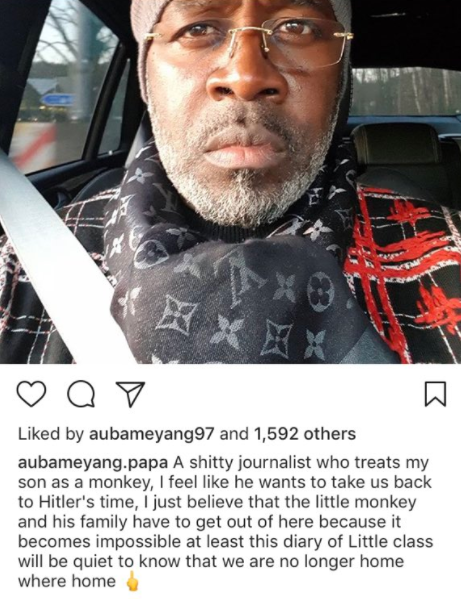 Obviously, the Hitler jibe has suddenly struck a nerve… even though said jibe was made almost two weeks ago.

Pierre’s comment, which has now been deleted from Instagram, was in response to an article written by a German journalist about the ‘monkey circus’ – or Affenzirkus – surrounding his son’s behaviour.

Aubameyang’s father took exception to the ‘monkey’ comment, which the journalist in question apologised for, for obvious reasons. ‘Affen’ means monkey in German.

According to Sport Witness, the German word actually translates to ‘monkey business’ or ‘charade’ so wasn’t meant as a literal statement, although a better choice of words should certainly have been used.

As non-native German-speakers, it’s easy to understand why the Aubameyangs would read the translation and get annoyed.

SportBild also refer to Aubameyang’s father as his ‘puppet-master’ in their weekly edition, claiming he has a huge influence over his son while reporting he will collect a decent amount of money if the striker moves to north London.

None of which are exactly outlandish claims considering Pierre is his agent.

The 28-year-old will reportedly receive €20m-a-year in wages, which is a bit of a contrast to the €3m that he was initially said to be getting. It’s almost as if they are just guessing.

There’s no doubt that Aubameyang is a bit of a trouble-maker, to put it lightly.

His list of ‘scandals’ is longer than my arm. But digging up stuff that his dad said in response to what the 52-year-old believed was a racist attack on his son while not holding the journalist equally accountable is a cheap shot.

There are plenty of other things Arsenal should be concerned about when it comes to signing Aubameyang – his persistent lateness and tendency to directly disobey his club for example – but this isn’t one of them.

Meanwhile, Kicker report that talks between the Gunners and Dortmund have stalled.

They must be new around here.