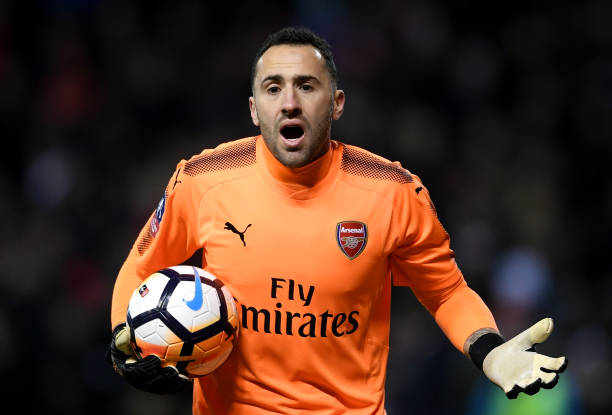 Arsenal delivered another fine example of how not to play football as they were dumped out of the cup by Nottingham Forest.

Losing 4-2 to Forest was surprising yet, when you really think about it, it was never beyond Arsenal.

A team of failing fringe players and hopeful youngsters took to the City Ground and were played off the park by an energetic and youthful Forest side.

Goals from Per Mertesacker and Danny Welbeck threatened to make a game out of it, but Arsenal simply didn’t have the defence to keep Forest out.

There was room for some refereeing controversy as well, but, overall, Arsenal were well-beaten.

The ratings today will unsurprisingly reflect that.

Arsenal’s best player on the day. If not for him, Forest could have been a few goals up before half-time. Just writing that sentence is depressing enough. He had little chance on both the penalties, and would have appreciated his defenders not letting the Forest attack waltz through at every chance.

Is it Per’s fault that he can’t run anymore? Unfortunately, nature is taking its toll on the German. Every time he plays now, you can see why he’s about to call it a day. His goal was very well taken and always welcome, but defending, his bread and butter, is becoming harder and harder for him.

Holding looked a promising young defender once. He couldn’t get to grips with Ben Brereton in the first half, and then when he tried in the second half, he just kept fouling him. His night was capped off by giving away a clumsy penalty. That run he had in the first team last season feels like a very long time ago.

Debuchy was having a quiet evening as he was rarely tested down his flank. He put in a couple of decent crosses in the second half, and will feel that a penalty wasn’t just rewards for what looked like a good recovering challenge late on.

Maitland-Niles has been rightly praised for his good form and showed again the deft touches and composure that people love about him. Unfortunately, his defending left much to be desired. He was often second to the ball and weak in the challenge.

I was tempted to not give Elneny a rating at all, given the game completely passed him by. He gave little protection to the back four, and made no impact with the ball.

Was tidy if unspectacular during his time on the pitch.

Watching Walcott these days just makes me sad. He plays like he’s going through the motions, and then when he gets the ball in good positions, he doesn’t wake up in time to make anything of them.

Out of form and unable to get a grip on the game. He couldn’t get on the ball in good areas, and had no where near enough influence in the game for a player in his position.

The only bright spark in attack, Nelson always wanted the ball, used it sensibly and took players on when the chance arose. It didn’t always come off, but he was offering something. He also produced a neat through pass for Welbeck’s goal.

Welbeck was having a completely forgettable game until he scored a typically scruffy goal. His first touch was clumsy, and he offered little movement. Yet he kept going, and at least got a goal out of the evening.

Had one decent chance on goal, but came on during a time when Arsenal weren’t creating chances.

Akpom was denied a first senior goal for the club by a good save from the Nottingham Forest keeper, but didn’t have enough time on the pitch to make much of an impact otherwise.