Curtis Davies says he cried his eyes out when he saw Arsenal lifting the FA Cup in 2014, the day the Gunners finally ended their trophy drought.

Davies is now with Derby County, who face Manchester United in the cup on Friday night.

But that day three and a half years ago, he was the captain of Hull City.

He told The Guardian he has mixed feelings about the final.

“It was bittersweet,” he explained.

“Arsenal had beaten us easily 3-0 at home three weeks before in the league. We were the underdogs, so when we went 1-0 up, we were in dreamland.

“Then I scored: 2-0. Obviously being captain, you start to think about climbing the stairs and lifting that trophy.

“We ended up losing and I was going round lifting people’s heads off the floor but as I’ve looked to see Arsenal lifting the trophy, that’s when I turned into a blubbering wreck.

“I started crying my eyes out.”

Even as an ardent football fan, it’s hard to imagine what players feel in moments like those.

Footballers give their whole lives to the game, training and working their way up the ranks.

If you’re lucky, it all results in some trophies before the end. If you aren’t, you meet Arsenal in the final and have to come to terms with missing your big chance.

Of course, from an Arsenal point of view, it’s hard to see it that way.

Istill smile to myself when I see Davies’ wild celebration at 2-0, because I know it’s all about to come crashing down.

That’s what football is all about when you support a big team: Crushing the dreams of plucky underdogs.

Winning trophies when 95% of the country want you to miss out.

There’d be no point supporting the Gunners if you didn’t enjoy that. 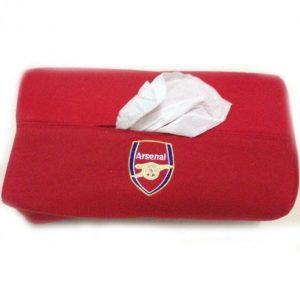