RB Leipzig midfielder Emil Forsberg, who Arsenal are reportedly watching, insists that while he’s comfortable at his current club, anything could happen.

Arsenal have been linked with Forsberg since April 2017, with the 26-year-old’s agent pushing for a move over the summer.

The rumours died down after the window shut, but the midfielder was tipped for a north London move earlier this month.

He was supposed to replace Alexis Sanchez once the Chilean moved to Manchester United, despite Forsberg being linked with a transfer to the Red Devils himself. 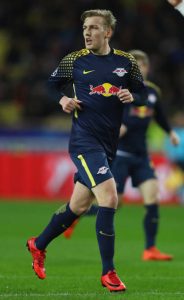 Speaking recently, the Swedish international admitted that while he’s happy at Leipzig, anything could happen between now and the end of the transfer window.

“Of course there is a chance that I will continue to play in Leipzig. As you said, I have a contract in Leipzig and I also fulfill my contracts,” he said.

“But in football everything is possible. In any case, I feel very comfortable here.”

Forsberg, who’s been with the Bundesliga side since 2015, has scored four goals and provided two assists in 18 appearances this season. Although he seems open to a move, he still has until June 2022 on his contract with Leipzig.

Early reports suggested the German club would only ask for £20m for the midfielder, but if he does well this term and gets selected for the World Cup, his value could sky-rocket.

At the moment, it doesn’t look as if anyone will be making a move for Forsberg until the summer.

Feyenoord want loan but Arsenal only want to sell 22yo