With Everton midfielder, Ross Barkley, out of contract at the end of the season, we look at whether Arsenal should actually make a move for him.

Over the summer, Arsenal, Tottenham and Chelsea were all linked with moves for Barkley.

For the most part, Gooners were relieved when we didn’t sign him since we don’t need another over-hyped England midfielder in the squad.

However, with the international yet to find a new club and out of contract in June, should the Gunners make a move after all?

The Gunners were said to be keen on the 24-year-old if Alex Oxlade-Chamberlain signed for Liverpool, which he did.

They were also reportedly put off by Barkley’s considerable £50m asking price.

By August, it was being claimed that Spurs could sign him for as little as £25m – half his original valuation.

Chelsea were allegedly the closest.

In fact, according to Everton owner Farhad Moshiri, the Blues almost completed a £35m move for the England international at the end of the transfer window. Moshiri even claimed the midfielder had a medical. However, Barkley denies this and a move obviously never went ahead.

Now, January is fast-approaching, Barkley is still without a new club and he’s yet to make a single appearance for the Toffees after suffering a serious hamstring injury in August.

It’s his first long-term stint on the sidelines since 2014… Well, at least he’s not injury prone.

Why would Arsenal want Barkley?

Although he primarily plays as an attacking midfielder for Everton, Barkley’s versatile and can play on the flanks too. Just like the Ox.

In fact, if you look at Barkley’s stats going forward, apart from assists, he beats the Ox in most areas. However, he’s not that dissimilar. 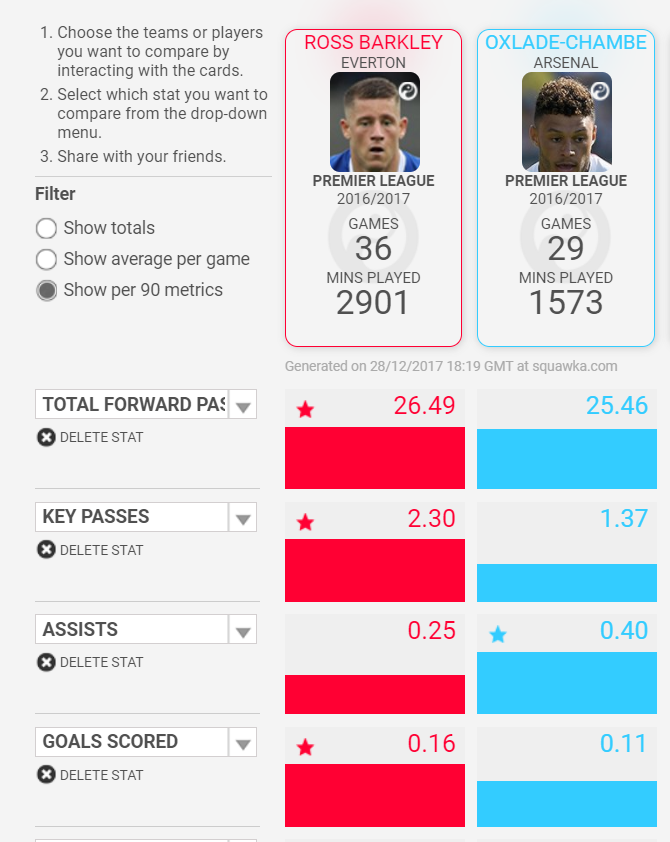 In other words, he’s experienced and versatile while still being young. He could make a decent enough squad player if we were short, especially if he was available on a free.

However, he’s mostly overrated because he’s English and we don’t need more squad players. We need strong, first team men who are going to come in and make a difference.

That’s why I believe Arsene Wenger wasn’t that bothered about getting rid of the Ox this summer.

We should be looking at quality not quantity.