With Manchester United already 3-1 up, and only 15 minutes left to play, Pogba went in for a ball he wasn’t going to win, and ended up stamping on the back of Bellerín’s leg.

Referee Andre Marriner spotted the incident, and brandished a red card for the French international.

Boateng says he’s not sure the 24-year-old meant it, but he shouldn’t have put himself in that position.

“I don’t think he meant it necessarily. I think it was the momentum and the decision making. It’s a physical game and Paul was stretching for it,” he told Sky Sports, reports the Daily Star. 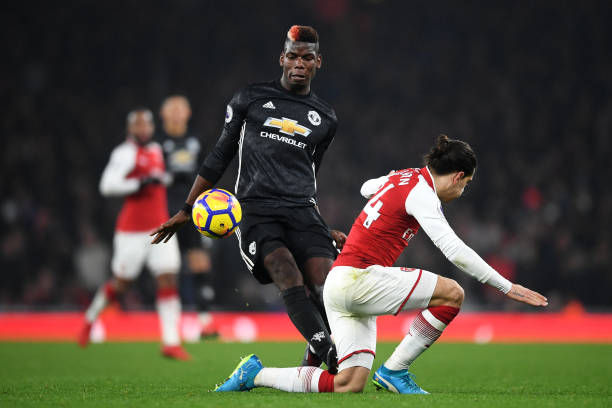 “It just happened. He didn’t mean to injure Bellerin. He regrets it. Why did he go over the top? It was not necessary. He could have let the ball go or Bellerin take it and now he will miss City.”

It was definitely an unnecessary challenge, considering the circumstances. There was no great need for United to win the ball back, Pogba just made a poor decision to let it run, and was then reaching to try and prevent that bad choice losing them possession.

His team were winning comfortably, and as Boateng mentions, the Man City meeting is coming up which Pogba will now miss.

This was no time to be taking risks, much as United manager Jose Mourinho would like to shift the blame to Bellerín for the style of his challenge, or Laurent Koscielny for appealing.

On the day, it didn’t end up making any difference to the result, however.