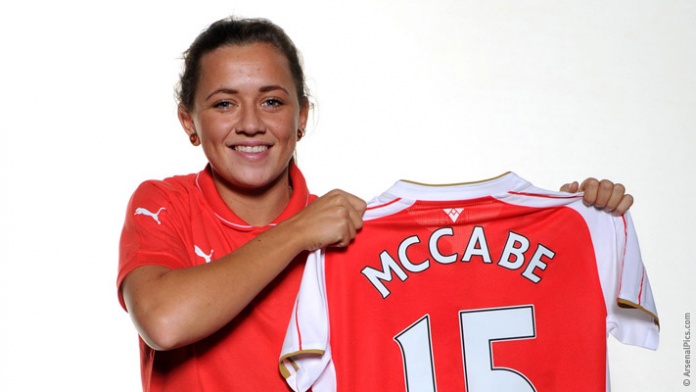 Irish winger Katie McCabe returns to Arsenal after a loan spell at Glasgow City. Can she now force her way in the starting eleven?

The good news for the PFA Ireland International Player of the Year is that the new manager will want to look at his squad before deciding which players become regulars in the starting eleven.

Former boss Pedro Losa did not intend to give her playing time as she was sent on loan, as was Chloe Kelly who is at Everton for the season. Losa’s replacement, Joe Montemurro, will have plenty of options at left-back, left-wing back and left-wing and attacking-midfield depending on which system he settles on.

At left-back and left-wing back, McCabe will compete with two other left footed players – experienced Scottish defender Emma Mitchell and the young England u20 international Taylor Hinds. Heather O’Reilly was used in those two positions and was a disastrous experiment at left-back but an okay performer at left-wing back.

Regarding the left-winger position, Heather O’Reilly, Danielle Carter, Lisa Evans are “natural” wingers. If you add Lauren James, Danielle Van De Donk, Anna Miedema and Kim Little (when fit) who can play as a left-sided forward, there is a lot of competition.

Overall, when all the players are fit, Joe Montemurro will have to choose 18 players from a 23 players squad and then his starting eleven. It will be a tough ask for the young winger to find a starting place in 2018 but not impossible.