Arsène Wenger said Raheem Sterling “dives very well”, after the Manchester City winger was fouled and awarded a penalty against Arsenal on Sunday.

Monreal definitely made contact with Sterling, and it was a poor decision by the Spaniard to commit to the challenge in that position, but there was still a strong suspicion that the England international went down very easily.

Wenger certainly thinks so, as he told his post-match press conference: “I believe it was no penalty. We know that Raheem Sterling dives well, he does that very well,” reports the Daily Star. 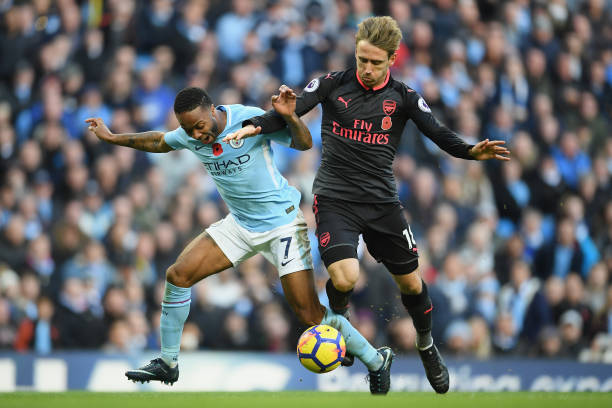 “You have seen what I have seen. Once again, the referee made the decision again, with a penalty and an offside goal. We are used to it when we come here.”

Over the summer, there were rumours that Sterling was a potential target for Arsenal if the Gunners were to sell Alexis Sanchez. Sterling later said that he’d never had any plans to leave City, and Guardiola knew that from the start of the summer, so a move was probably never on the cards.

However, it does seem that Arsenal were interested in the forward, so perhaps that just added to Arsène Wenger’s frustration watching Sterling win the penalty that cost his side so badly. The Gunners only ended up losing the match as a result of the penalty and a goal that was very obviously offside.