Shkodran Mustafi, Mesut Ozil and Alexis Sanchez were all stand-out performers in the Premier League over the weekend.

The trio were in excellent form as Arsenal defeated Tottenham 2-0.

Each of them made it into Garth Crooks’ team of the week, although only Mustafi is playing in his preferred position. 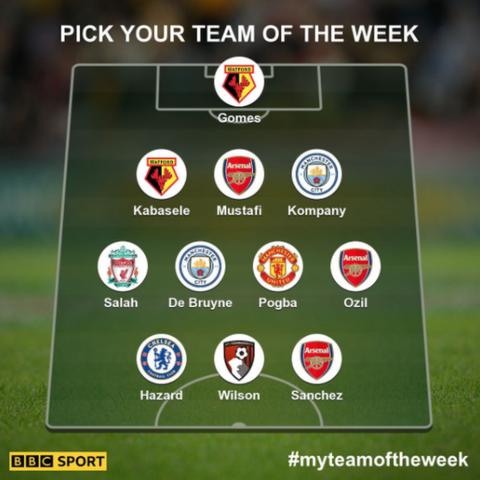 On Mustafi’s performance, Crooks spent more time talking about combined elevens and the controversy surrounding his goal rather than his performance.

However, he at least did have this to say: “Shkodran Mustafi would almost certainly not get into Tottenham’s back three. But what does it matter when you can produce performances that are so defensively brilliant?

“At times you wonder how on earth the German can be so utterly disastrous on other occasions. He was the best defender on the pitch by a mile.”

On Ozil, who’s playing the unorthodox role of left wing-back in his line-up, Crooks felt that Arsenal fans didn’t deserve him, and that it was about time he was truly appreciated.

“I did not hear anyone from the Arsenal camp complaining about Mesut Ozil’s performance against Tottenham in the north London derby – no comments about him being lazy or not being a team player, playing for himself or not being interested.

“What I did see was Arsenal fans giving the player a standing ovation in appreciation of a wonderful performance by an extremely gifted footballer – and about time.

“Considering some of the complaints I have heard in recent years about Wenger and Ozil from Arsenal fans, I am not entirely sure they deserve either of them.”

In typical style, Crooks’ appraisal of Alexis’ performance was more a criticism of Spurs not turning up to the game than praise for the player.

He said: “The charge was led by Sanchez, of course. Who else in the Arsenal team was capable of tormenting Jan Vertonghen, Davinson Sanchez and Eric Dier all at the same time?

“The Chile forward was once again outstanding, led from the front and showed the sort of leadership qualities only world-class players possess in games that mean far more than just points.”

Meanwhile, only Mustafi made Goal’s Team of the Week, perhaps due to their choice of a more traditional formation.

Salah, De Bruyne and Hazard in the same team? 🔥🔥 Jose Mourinho might need to look away here! 🙈🙈 #CFC #MUFC pic.twitter.com/2ll4yic2Yu

Any team with Ragnar Klavan and Alberto Moreno in it over more deserving performers will always look strange.

Liverpool got what looked like a routine win over Southampton, while Ozil and Alexis played incredibly well in a big match. I can only imagine Goal didn’t want to put either of them at left back.