Arsenal travel to the Global Metcorp Stadium to face Watford Women in the Continental Cup on Thursday evening, and are on the verge of qualifying for the quarter-finals.

Arsenal enjoyed a recent 3-0 win over Sunderland, and they’ll be looking for a win this evening.

A draw should be enough following yesterday’s group game between Reading and London Bees that saw the Royals comfortably beat their WSL2 side opponents by four goals to nil.

Arsenal need a win against the Hornet and hope for a Reading defeat away to Millwall to have a chance of winning the group.

Arsenal go into this game off the back of four wins in their last five games against London Bees, Everton, Millwall and Sunderland. Since sacking Pedro Losa at the end of October, they have played four, won three and lost one, scoring 11 and conceding four in the process. 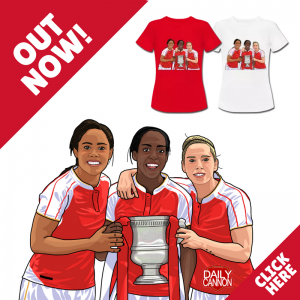 Arsenal are currently third in the WSL 1 table with 10 points from five games this season, still five shy of leaders Manchester City. The Gunners are three points adrift of second-placed Chelsea.

Watford have endured a poor start to the new campaign, having picked up just one point from their opening five games in the Women’s Super League 2. Watford have fared better in the Continental Cup, however, with one win and a loss in their opening two games.

Keith Boanas has come and turned around the fortunes of a Watford Ladies side that was close to folding last winter. He built a strong squad for the WSL 2, with many experienced signings.

But last week, the players and coaching staff have been dealt a big blow, when the parent club announced they would withdraw the team from the WSL altogether and play in the Third Tier.

Watford Ladies have many former Arsenal players. Meghan McKeag was in the 2006/07 squad when the Arsenal won six trophies and went unbeaten in all competitions. Adekite Fatuga-Dada was a member of the development team for a couple of seasons.

Bianca Bragg went through all the age groups and was a fringe players in the first-team squad before moving to Reading. Helen Ward had a couple of seasons at the club with mixed results.

Arsenal go into this game with injury concerns for six players.

Kim Little is on holiday at the moment still coming back from her ACL injury.

Vyan Sampson has been seen on social media videos working hard in the gym and hopefully will be back soon.

Jessica Samuelsson is out for a long period following her ligament injury.

Josephine Henning is injured, but there has been no communication from the club about it.

Sari Van Veenendaal missed out on the last game, so might not be risked.

Leah Williamson, who was injured against Reading and subsequently substituted, is a doubt.

Ismael Garcia seems to prefer using a back three, and will hopefully include many youngsters for the game, as it is another opportunity to see if they can match a WSL 2 side in term of physical strength and quality.