Joe Montemurro will have his work cut out as manager of Arsenal Women, with the Londoners struggling for form.

When there is a defeat, it is important to analyse the performance as well as the result. Is the result due to the players, the coach or both? I think it is hard to pinpoint where the responsibility lies at the moment.

The first half was uninspiring with the referee trying to control the game as both sides tried to assert their physical superiority before trying to play football.

With challenges flying in and both sides committed to get stuck in, defences were on top. It was no surprise to see the score goalless at halftime. The game came alive in the second half thanks to Fara Williams for Reading and Beth Mead for Arsenal. 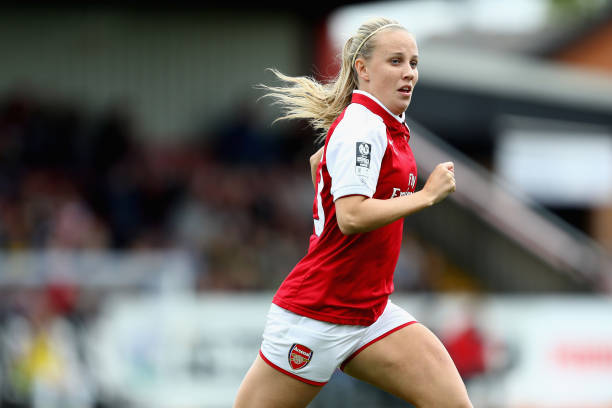 Williams opened the scoring with a nice finish from a cutback where she managed to ghost through the Arsenal defence. Mead was sent on straight-away and got a deserved equaliser, before Williams scored a long range effort from the restart to put Reading back ahead.

It finished Arsenal 1-2 Reading. So, what went wrong with the tactics and substitutions? The first thing that comes to mind after the game is square pegs in round holes. I did not expect Miedema in the left playmaker position and a central pairing of Nobbs and Van De Donk. It was quite an unbalanced team and a couple of players clearly weren’t in their best position.

I don’t know many managers would rather have Miedema sitting 20 to 40 yards from goal rather than in the box where she can inflict maximum damage. Having Van De Donk sitting even deeper alongside Nobbs was as puzzling to be honest. When you have so many attack-minded players on the pitch, you leave gaping holes for the opposition to exploit.

The first substitution was an enforced one with Leah Williamson suffering a first-half injury. It adds up too, with Jessica Samuelsson’s operation, Josephine Henning on crutches as well, and Vyan Sampson out for the long-term. Dominique Janssen came on for Leah Williamson and slotted at left centre-back seamlessly.

The second substitution was Beth Mead coming on for Jodie Taylor, who seemed short of match fitness. Her and Miedema seemed to be lacking some sharpness. Mead was superb, however, and made an instant impact. Again, why not play with two forwards and one playmaker behind them, rather than two playmakers behind a lone striker ?

The final substitution came in the form of Danielle Carter replacing Louise Quinn. So where was Carter sent to play? Up front alongside Mead? Behind the main striker? Nope. Right wing-back. Heather O’Reilly then moved to left wing-back, then Dominique Janssen moved to centre-back alongside Emma Mitchell.

Talk about a disjointed formation. The substitution allowed the team to put even more pressure on Reading and throw the kitchen sink at them, but it was quite an unstructured way. It has to be said, the performance was not close to the standard expected at Arsenal and there is a lot of improvement to be made under Montemurro.

The Development team are second in the FA WSL Development League Southern Division, one point behind Millwall with two games in hand.

The FA website reports that their 7-0 win against Yeovil in the League Cup has been overturned into an A-W.

Next for Arsenal is Sunderland at home in the league on Sunday, November 12.