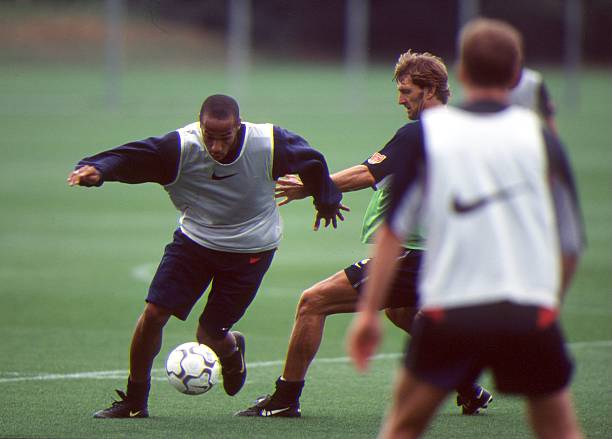 A study by giffgaff Money compared the transfers of today to players of the past, to try and judge how much they would be worth now.

After Neymar’s £200m move to PSG, Kylian Mbappé and Ousmane Dembélé followed for nine-figure fees as well (even if Kylian’s fee won’t be paid until next summer).

Giffgaff looked at the goal records, age and clean sheets of legends of previous eras, and compared them against players moving today, to try and evaluate how much those legends would be sold for in the current market.

Henry was compared against the recent transfer of Alexandre Lacazette. Lacazette moved for just under £50m, but by the age of 26 Thierry had already hit top goal-scoring form, and was bearing down on Ian Wright as Arsenal’s record scorer. Giffgaff took all of those factors into account and decided Henry would be worth a pathetic £103m today.

Meanwhile, Tony Adams was compared against the recent transfer of Victor Lindelof to Manchester United. Lindelof moved for £31.2m, so comparing his records with Tony Adams at the same age (23), Giffgaff concluded that Adams would be worth £64.1m.

It’s puts the scale of the task facing Arsenal every time they go into the transfer market into perspective. If the Gunners hope to attract the next Thierry Henry or Tony Adams, they’re really going to have to spend big, as either would mot likely cost more than the current club transfer record.