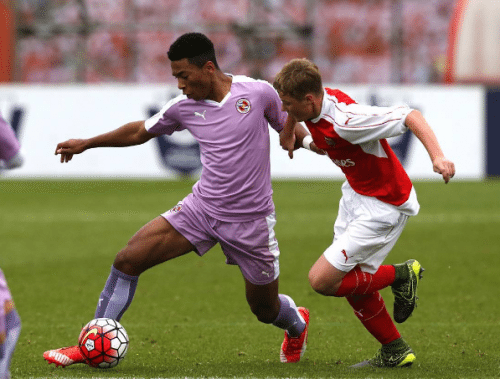 Arsenal’s u18s lost 2-0 to Leicester City after the youth side were forced in to fielding an extremely inexperienced team on Saturday.

The u18 side are feeling the effects of so much youth involvement in the first-team in recent weeks. Players like Reiss Nelson, Eddie Nketiah, Joe Willock and more have been playing in Europe, and will likely get a chance again when the Gunners face Norwich next week.

Therefore the u23s need reinforcements from the u18s, which left the u18s having to look at even younger players. Combined with young star Emile Smith Rowe heading off to the u17 World Cup with England, and more than a few injuries, and the team was left very much depleted.

A total of six players got the chance to make their u18 debuts against Leicester, with one more making the bench for the first time. Miguel Azeez, Stan Flaherty, Arthur Okonkwo and Josh Martin all got their first starts, Matthew Dennis and Yunus Musah appeared from the bench, and Hubert Graczyk was named in the squad for the first time.

As for the actual game, it went roughly how you’d expect when such an inexperienced team faces one that regularly plays at this level. Leicester took an early lead through Conor Tee, before Matthew Smith scored an own goal late on to seal the victory for the Foxes.

Overall, a 2-0 defeat isn’t too embarrassing considering the changes made. Hopefully next time they get a chance, more of the youngsters will be ready for the next step up.