Arsenal’s 2017/18 away kit caused a bit of a stir among fans since no one actually appears to like it.

The blue 2017/18 away kit looked too much as if it belonged to a rival and Gooners instantly pointed out how Arsenal’s sleek, black third kit should have taken its place.

However, I definitely wouldn’t say it’s been the Gunners’ worst kit ever.

Arsenal don’t have a great record when it comes to away kits and while there’s the odd home strip that won’t live up to the likes of the classic JVC shirts of the 1980s, there aren’t many that actually offend the eyes.

This was a mess. The massive Adidas stripes were off-putting to say the least and if it wasn’t for Arsenal’s badge, you wouldn’t have known it belonged to us.

While blue away kits aren’t new, they’ve never really been liked much. At least not by Gooners.

Our away kit in 2002/03 looked cheap and had nothing to do with Arsenal. 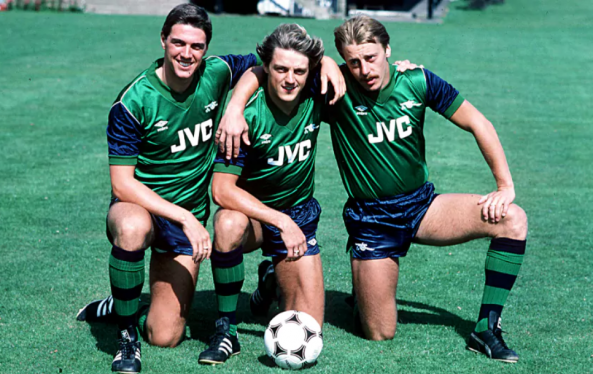 What’s going on with this one? This green and blue kit has been the only one of its kind… thank goodness.

I can’t look at this without getting a migraine. It was busy and messy. Although somewhat iconic looking back.

Wojciech Szczesny looked like a massive pink highlighter and hated it… I bet this is why he left isn’t it?