Chelsea boss Antonio Conte has blamed Alexis Sanchez for provoking David Luiz into making a dangerous tackle that led to a red card.

Keen to put the blame on anyone except his own player, Conte tried to divert the attention away from the actual red card incident to what happened just before, reports the Daily Mail.

“I don’t like to comment on refereeing decisions, it is in the past, but now the only thing I can tell you is it is very important to see what happened before the David Luiz tackle,” he said.

“For sure, that was a foul (by Sanchez on Luiz). But the referee took this decision. If he stopped the play before, it wouldn’t matter.”

Unfortunately for Conte and David Luiz, you don’t get a free pass to clatter into someone’s ankle just because you didn’t get a foul a minute earlier. 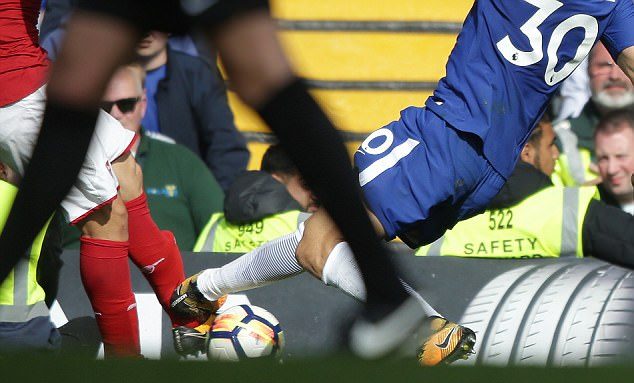 An intelligent centre-back should know you have nothing to gain for taking a foul-not-given so seriously that you dive into the next challenge looking for revenge. At best you can get away with it, but at worst you’re sent off or end up badly injuring someone.

When committing the foul, Luiz was already on a yellow card from an earlier incident. I doubt either Conte or the Brazilian can deny he deserved at least a yellow for this second foul on Kolašinac. So whether it was a yellow or red, Chelsea were deservedly reduced to 10 men.

Of course, the centre-back will now serve a ban of three matches rather than one, but ultimately that is fully deserved, given the damage that could’ve been done to Sead’s leg.