Arsenal have been given a series of incredibly lucky (and easy) draws in cup competitions, according to the Daily Mail, but have they really?

Apparently, Arsenal have been lucky in their draws in the FA Cup and the League Cup.

The Daily Mail did a piece examining Arsenal’s ‘luck’, mentioning that Arsenal had drawn the weakest side left in the draw on four occasions in the League Cup, while also mentioning their games against Lincoln and Sutton in last year’s FA Cup. 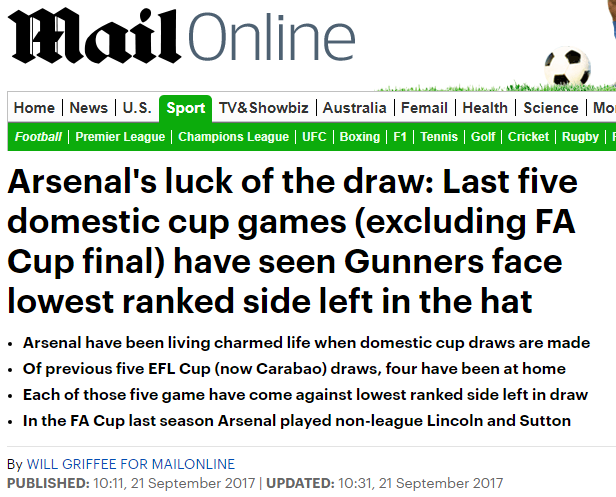 After being drawn against League 1 Doncaster at home in the Carabao Cup, Arsenal then got Championship side Norwich, again at home.

Indeed, this could be seen as lucky. Those draws are certainly favourable for Arsenal.

However, it should be pointed out that even with those favourable draws, Arsenal haven’t gone onto to win the League Cup.

In fact, they haven’t reached the semi-finals since the 2010/11 iteration of the tournament.

As for the FA Cup, Arsenal were fortunate to be drawn against non-league opposition in Sutton and Lincoln last season.

Then, having run out of easy teams to play, they were left with Manchester City and Chelsea, and beat them both.

Ultimately, Arsenal aren’t in control of their own destiny here. People can complain about luck, but the draws are a random process. Do people expect Arsenal to ask for a redraw?

In the end, Arsenal can only beat what’s put in front of them. Whether it’s a top team or a non-league team, Arsenal have beaten them.