According to the Daily Star, if Alexis had completed his £60m move to City on Transfer Deadline Day, he would have been made the club’s highest earning player. The Sky Blues were reportedly willing to hand the Chilean £275k-per-week.

On top of this, the 28-year-old would have supposedly earned £50k-per-week in bonuses, which means he would make £325k-per-week some weeks… Most weeks, if said bonuses were for scoring. 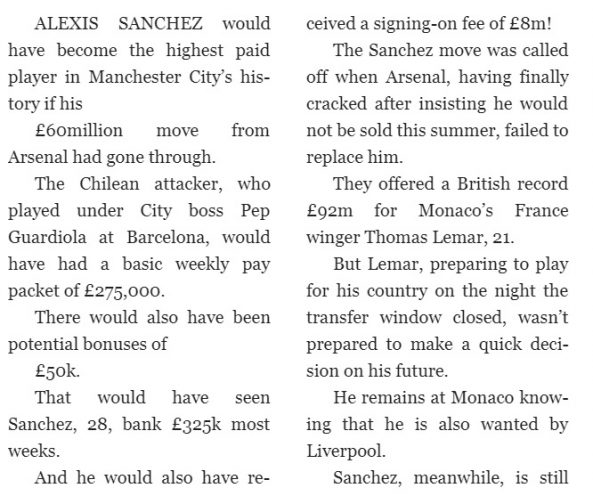 But wait, there’s more. The forward was reportedly set to receive a whopping £8m signing-on bonus.

If true, no wonder he couldn’t bloomin’ wait to leave.

City’s highest paid player at the moment is Yaya Toure, who allegedly earns £190k-per-week, which does make Alexis’ rumour wages of £275k seem a little far-fetched considering he wants to go there anyway. It’s not as if they need to persuade him with cash.

Alexis has under a year left on his deal with Arsenal so he won’t have to wait too long to find out.