Arsenal’s third Premier League game of the season saw them again pick the wrong players in the wrong positions, and it was no surprise they were on the receiving end of the wrong result.

Unlike Leicester, where they produced enough moments to win the game without ever looking structurally comfortable with or without the ball, Arsenal never really got going on Sunday despite fielding the closest thing to an XI that makes sense all season.

The most glaring irregularity remained Hector Bellerin shoehorned in at left wing-back so as to accommodate Alex Oxlade-Chamberlain on the right. The Ox is a player who has already made it abundantly clear that he had no intention of prolonging his stay at the club beyond the conclusion of his contract at the end of the season.

Selecting a player who has already mentally checked out and has allegedly been in discussions with both Chelsea and Liverpool this summer, which force a superior player out of position, was baffling from the manager.

Some people have compared playing the 24-year-old at Anfield, and indeed in the first two games of the season, to selecting Samir Nasri at home against Liverpool in August 2011, days before his move to Manchester City.

However, the key difference is that Nasri was selected in a 2011/12 team who, Robin van Persie aside, were not at the elite level, hadn’t won anything and were still in the early stages of their careers. Nasri was selected despite having mentally checked out six months earlier because Wenger had nobody else good enough available.

On Sunday, a clearly disinterested Oxlade-Chamberlain was playing in a team of accomplished players, who have won three FA Cups in four years, playing right wing-back at the expense of the superior Bellerin. Sead Kolasinac, who last season was voted Bundesliga left-back of the Year was omitted altogether at Anfield. It made no sense on any level. 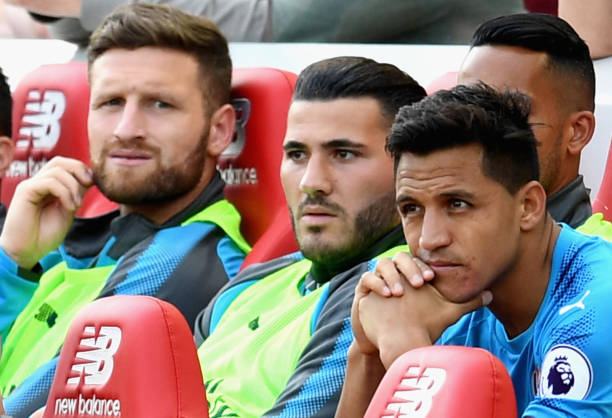 The defeat at Stoke was galling because it was so unnecessary. Not just because of Wenger again doing the aforementioned with Ox and Bellerin, but with shoehorning Kolasinac in as a left centre-back when he had Per Mertesacker, Calum Chambers and Rob Holding all available.

You’re always going to be on the receiving end of poor refereeing decisions, but you can safeguard against it and give yourself the best possible chance to win the game by at least picking players in their proper positions, and asking them to do things they’re familiar with and good at.

Liverpool’s first two fixtures this season saw them face Watford and Crystal Palace, who will both likely face a relegation battle, I feel. Sunday’s match against the FA Cup holders, who finished a point below them last season, was the easiest of all three. They scored four goals against a shambolic Arsenal team and it could have been six or seven.

While there’s some value to be gained from picking apart each of the four goals, more can be gained from looking at the underlying reasons as to why Arsenal were so easy to play through.

The names and faces of opposition goalscorers may change week to week, but these deep underlying issues at Arsenal will remain until something substantial is worked on at the training ground.

In the following screenshots, you can see how quickly and how easily Liverpool manage to progress the ball up the pitch. This is in the first minute. 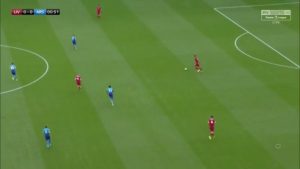 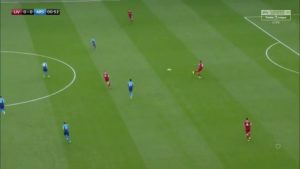 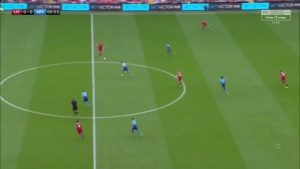 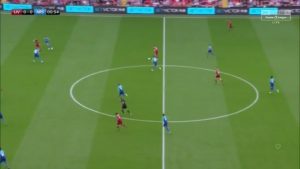 Liverpool don’t have anything resembling a traditional distributor in their back line or a midfielder capable of playing eye-of-the-needle passes. But with way Arsenal set up, it made life so easy for them that they didn’t even need a specialist to cut through them with consummate ease.

On the ball, Arsenal looked pretty listless. Everyone was running away from the player in possession and nobody was really showing for the ball. The movement was basic and the passing was unsurprisingly tame. The underlying reasoning for this was that nobody was moving between the lines.

The wide players and wing-backs were generally playing on the same line. Without someone making the move from out-to-in, to present another option and pull some opposition defenders out of the way, you’re playing safe and telegraphed passes. Even if they meet their intended target, the play won’t be able to progress in any meaningful way due to a lack of options to progress up the pitch. 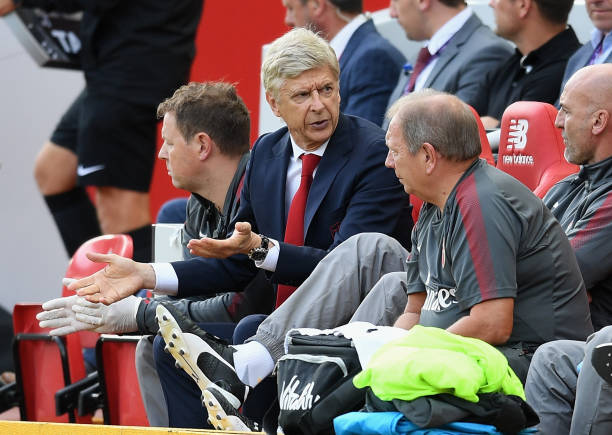 Without players moving intelligently off the ball to take up good positions, you don’t invite incisive passes. Without this, the only way to disrupt the opposition’s lines is high-risk dribbling or attempting a low-percentage pass, which heightens the risk of turning the ball over and getting hit on the counter. Of the eight goals Arsenal have conceded this season, six have come within 10 seconds of conceding possession -five have been from crosses.

Liverpool outnumbered Arsenal’s central midfield three to two, and after winning the ball would quickly spring a counter running at a retreating flat back three. Partly due to this, Arsenal’s defence looked very flat in possession themselves, reluctant to create angles or attempt risky passes through the lines, for fear of turning the ball over and inviting another counter-attack. This contributed to the Gunners looking severely outnumbered on the ball as well as off it.

According to Opta, Arsenal had zero shots on target and created zero clear cut chances against a team containing Loris Karius, Dejan Lovren, Joe Gomez, and Alberto Moreno. This was only the third time they’d failed to work an opposition keeper in the Premier League since 2003.

These are largely structural issues that won’t be resolved by bringing in a couple of new signings. That would be tantamount to re-arranging the deck chairs on the Titanic. There need to be changes to the way Arsenal train, both with and without the ball, in response to the lessons learned at Anfield.