Every year, pre-season offers an opportunity to some of our youngsters.

Most choke on the occasion, but every so often someone grabs the opportunity to demonstrate not only their ability, but their potential as well.

This year, despite props to Joe Willock, my pick for the player staking a claim for his future as an Arsenal regular is Reiss Nelson.

He’s got plenty of great attributes – he’s pacy, technically sound, skillful and confident. He had a screamer of a debut against Sydney FC on Thursday, when he was probably the best player on a pitch that included the likes of Mesut Ozil. But that’s not what impressed me most. 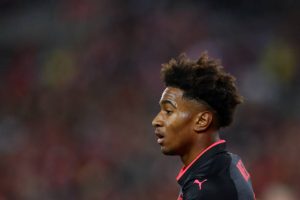 At the top level, plenty of players have all the attributes and never make it, because their mentality isn’t right. We’ve been accused in recent years of having too many players who when push comes to shove just don’t quite step up.

Given the opportunity, Reiss Nelson put in the performance of a lifetime and then followed it up with an impressive cameo. For the young lad we watched on Thursday, the big occasion was his debut senior appearance, a chance to make a claim on a first team squad place. He was unfazed. In years to come, that mental fortitude could help him deliver his best performances in the biggest games, whether those are for league titles or in cup finals.

It was easy to look around and see the contrast with some of the other young players who didn’t acquit themselves quite so well.

I mentioned Joe Willock in the opening as another player who did well, but at times against Western Sydney Wanderers he was guilty of trying too hard, running straight at banks of defenders centrally when his simplicity of play from the first game was as effective. 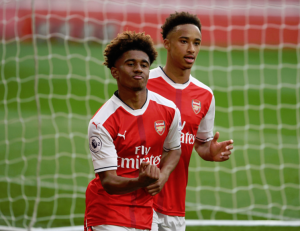 Ainsley Maitland-Niles is a player with significantly more experience, having featured for the first team previously and with a loan spell at Ipswich under his belt, but he had something of a nightmare after coming on in the first tour game. He’s clearly got all the skills, but his brain let him down with his decision making and at centre back that was all too obviously exposed. He’ll have more chances, but he probably went to bed on Thursday wishing he’s kept things that little bit simpler.

Eddie Nketiah is another who delighted and exasperated in equal measure. The talent is obvious, but he was another guilty of trying too hard. A fantastic shot spun back off the post in our most recent fixture, but in both games the youngster seemed too fixated on the glory of a goal rather than thinking how doing the best thing for the team rather than his own chances might actually better for him longer term. We’ve already got two senior forwards in Alexis and Walcott who will shoot on any opportunity, and that’s probably not the role we’re looking for from a youngster just breaking onto the scene.

Nelson, by contrast, took the opportunity to impress individually when it arose in the first game, but also was able to consolidate that in his second appearance with a solid and mature display against the Wanderers.

It is that maturity which marks him out as the one to watch for the future.