Reiss Nelson started for Arsenal against Sydney FC on Thursday morning and promptly made everyone sit up and pay attention.

So, who is Reiss Nelson? 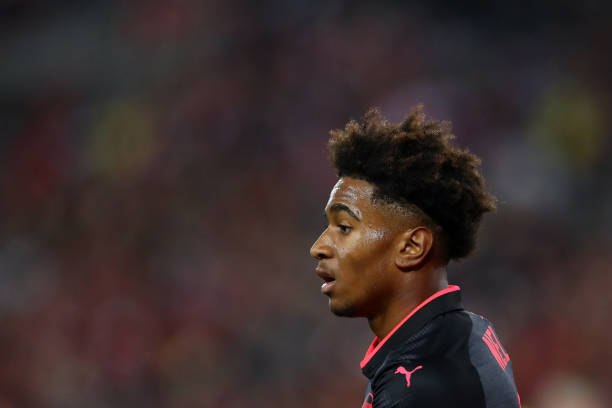 The highly-rated winger, still only 17, has rapidly become a familiar name on the lips of Arsenal supporters watching Academy prospects progress.

Having signed his first professional contract last December, performances at both u18 and u23 level have stood out from the crowd and he has impressed on a consistent basis.

Joining the club as a seven-year-old, it’s clear to see that he enjoys playing for his boyhood team and his tendencies on the pitch reiterate this. Constantly eager to get on the ball, adventurous but equally brave when things aren’t going his way, Nelson is able to get supporters off their seats and has taken time to improve the finer side of his game to become a better player.

He’s versatile and has shown a willingness to play in a variety of different positions, including in the number ten role or as a Toni Kroos-type player. His technique and ability to create goals, just like the Real Madrid midfielder, are arguably better than the rest of his team-mates and he’s keen to maintain his hard-working approach out of possession too.

Showing balance, agility, and vision, he’s constantly in search of ways to improve himself and it’s refreshing to see from someone so young, not least given how quickly expectation can force unnecessary pressure onto youngsters.

As the season continued, Nelson began to get more involved in terms of overall goal contribution to the team. His frequency in scoring goals and creating assists has improved, to the extent where he’s more efficient in the final third than the likes of Chris Willock and Donyell Malen (both 19).

Nelson actively relishes the opportunity to skip past opposition players and invites challenges so will need to hone his decision-making and accept the fact that he will be fouled a lot. Most players simply cannot catch him once he accelerates.

With an interesting summer of change ahead, Nelson will be hoping for an opportunity to stake his claim in front of a wider audience during Arsenal’s pre-season campaign.

It’s unlikely that he’ll be promoted to the first team next term, but perhaps the coaching staff will want him to earn minutes on-loan in the Championship.

Alternatively, he could continue as an u23 player before a January loan deal similar to those enjoyed by Krystian Bielik and Stephy Mavididi this year.

Arsenal 16yo impresses in first start since Arteta call-up