Former Arsenal Ladies u17 player, Ellie Perkins, has returned to the club after a few seasons away.

Ellie left the club at the end of the 2015/16 season following a double winning season with the Centre Of Excellence u17 team. 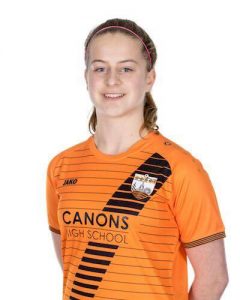 She started the next season with the London Bees Development Team from September to January and was then promoted to the Bees first team by their manager David Edmondson.

Ellie then spent the Spring Series and FA Cup games as a starter at right-back for the Bees and made eight appearances out of a possible ten, still aged only 16, which is a credit to her fast development as a player during that period.

She will join her former team-mate at Charlton Miri Taylor who has also just signed up.

Hopefully, Perkins will be able to further develop her skills and compete for a first team place in the near future, especially as Alex Scott will be close to retirement very soon.

With Anna Patten and Lotte Wubben-Moy off to study in the USA, there should be an opening for a youngster in the first team defence quite soon.