Alexandre Lacazette’s shirt number at Arsenal has finally been revealed.

Lacazette has been handed the #9 shirt at Arsenal, which is exactly what pretty much everyone predicted and further proof that the 26-year-old will become the Gunners’ first choice striker.

Eagle-eyed Gooners sussed out the France international’s squad number before the announcement since you could order his shirt via Arsenal’s online store. 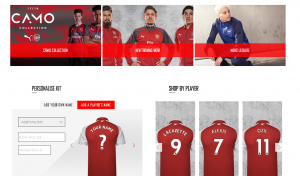 Lucas Perez, who previously has wore #9, has been heavily linked with a move away from north London this summer and has been left behind in London while the rest of the squad travel to Australia for their pre-season tour.

While Lucas will get the #28 for the time being, the shirt change makes it seem that the 28-year-old is edging further towards the exit.

Alexandre Lacazette will wear the no.9 shirt for Arsenal, as confirmed by the club's online store. pic.twitter.com/cc63a2CIuo

Lucas Perez, who is seeking a move away from Arsenal, will wear the no.28 shirt. pic.twitter.com/fBHpJVxAg2

Former #28, Joel Campbell, doesn’t appear to have been designated a new shirt, which heavily suggests that he’ll be leaving this summer too.