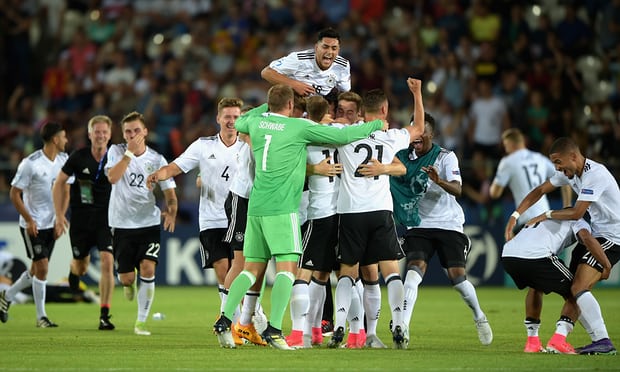 It was a surprising result, especially given the way that Spain had almost effortlessly steamrolled their way into the final while Germany weren’t at their best.

But, like they’ve done before, the Germans saved their best performance for last and stunned their opponents, who underestimated Germany’s range of threats and found their key players stifled in attacking areas.

Tireless work across the pitch ensured players like Gerard Deulofeu and Marco Asensio didn’t get too much time on the ball and both were regularly frustrated. Sandro Ramirez, a rumoured Arsenal target, didn’t have much service to work with and overall, Germany were the better side over the 90 minutes.

Spain had the squad with better players on paper, though were effectively outclassed by Stefan Kuntz’s side.

It’s fair to say they were outclassed and Hector Bellerín left understandably frustrated, having played his part in proceedings. He was defensively solid and called into action on a handful of occasions, especially in the first-half as Germany pressed for an opener.

Bellerín won tackles and aerial duels regularly, though he couldn’t do anything to stop Weiser’s effort from the opposite flank. He might be disappointed to have seen his header flash narrowly wide of the far post in one of Spain’s rare goalscoring chances.

Jeremy Toljan’s inviting delivery was flicked goalwards and despite a slice of fortune in the way it looped over Athletic Bilbao’s Kepa Arrizabalaga given their dominance in terms of chance creation no-one could begrudge them the goal.

The second-half was more of the same, becoming an edgy game with Spain still rocked by conceding just before half-time. They tried to create chances but found themselves stifled for large periods, as Germany forced them into long-range efforts without really troubling goalkeeper Julian Pollersbeck.

As for former Gunner Gnabry, he had a mixed evening before being replaced with less than ten minutes remaining.

He showed flashes of individual brilliance and skill upon occasion, but was crucially wasteful as some good opportunities carved open the Spain box and often rushed needlessly when he could’ve shown some more composure to put the game beyond La Rojita before the full-time whistle.

Next – Bellerin reaction to defeat – “I have a contract over there [in London], I have to report back at Arsenal”

Granit Xhaka angry at being substituted on 100th cap