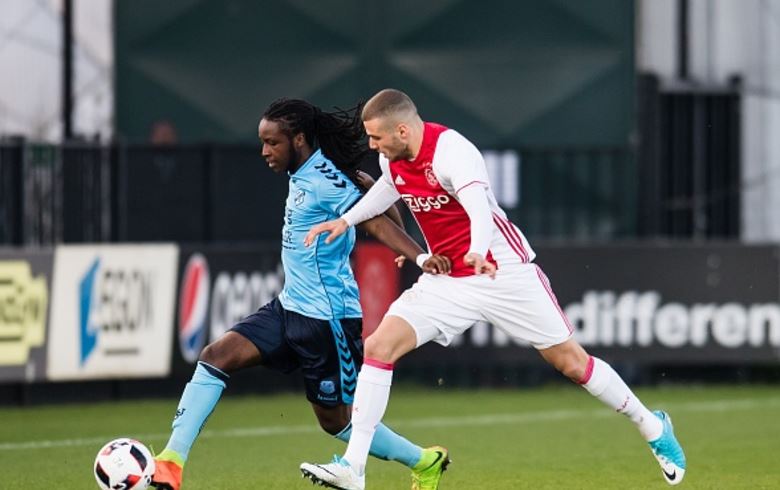 Having signed his first professional deal in the summer of 2014, it’s fair to say that big things are expected from right-back Tafari Moore.

The speedy Rastafarian – his dreadlocks are not just a fashion statement, his Caribbean roots are strong – joined the Gunners in 2009, following four years at Queen’s Park Rangers.

He’s made more than 40 appearances across three seasons at u18, u19 and u23 level for Arsenal but his brave decision to leave home and seek competitive experience elsewhere in Europe has proven beneficial for the talented youngster.

Although he only made one Eredivisie appearance, off the substitutes’ bench in September last season, he became a mainstay in FC Utrecht’s second-string side, otherwise known as Utrecht II.

26 club appearances later, Moore developed defensively as a result and learned valuable lessons whilst playing in the Netherlands last season alongside new team-mates who’ve welcomed him with open arms.

Encouraged to attack more in the youth ranks, he has since had to curb his tendencies to become more defensively aware.

Attack-wise, he offered a reliable outlet down the flank and came close to scoring from close-range. His defensive positioning wasn’t always in sync with the remainder of his backline, however, and it was his hesitancy which cost Utrecht a chance to snatch a point at the death in one game.

Too far wide and thus inviting the pass across towards Kevin van Kippersluis, he didn’t react quickly enough to snuff out the danger before a delivery was whipped into the area. Seconds later, Bert Steltenpool slipped past his marker to slot home.

It’s these types of moments in matches like these that will prove beneficial for Moore’s development in future. Although it’s harsh to solely blame him here, he could’ve easily prevented the cross and has shown enough defensive ability to justify higher expectations.

Not included in England’s u20 World Cup squad, Everton’s Jonjoe Kenny and Tottenham right-back Kyle Walker-Peters were selected over him. All three are rated highly at their respective clubs, though Kenny was instrumental in helping Everton win Premier League 2 last season while Walker-Peters is increasingly close to a first-team breakthrough.

With that in mind, it’s understandable that Moore was not chosen, though he shouldn’t be disheartened.

In terms of direct competition, it’ll be intriguing to see how the short-term future is dealt with for both Moore and Chiori Johnson.

Hector Bellerín is Arsenal’s first-choice at right-back and although Alex Oxlade-Chamberlain has impressed there previously, it’s becoming increasingly clear that he’ll be moved into his preferred role in midfield.

Mathieu Debuchy and Carl Jenkinson are both likely to leave this summer and Calum Chambers is more of a centre-back than a fullback now.

That means there’s a genuine chance for one of the youngsters to impress if given an opportunity amongst the senior squad in pre-season.

The last 12 months have been important for Moore’s development and although it remains to be seen whether he’ll stay in England and get loaned out elsewhere next term, his eagerness to learn is likely to be rewarded with a contract extension.

He has 12 months left on his existing deal at Arsenal and turns 20 next month.