With the season reaching its end, it is almost time for the Premier League to announce the best of the best – Player of the Season.

This year’s eight contenders for a prestige award are:

The 21-year-old has impressed through the season with strong performances, making 35 appearances whilst scoring 17 goals and setting up another seven for his teammates. A versatile attacking midfielder, he is one of the best discoveries of recent seasons and his future looks quite promising.

The Spanish full-back has flourished this season under Antonio Conte who often tested his abilities in various positions. Azpilicueta has played as one of three central defenders, often being required to push forward, and the 27-year-old fulfilled the majority of his duties. He has made 36 appearances, assisting five times.

The attacking winger from Belgium has once again played at the top level this season. After a disappointing campaign last season, Hazard has managed to pick himself up and once again has been one of the top performers from the start of the season. The Belgian has played in 34 games, scoring 15 goals and making five assists.

The 23-year-old English striker is still proving all those who thought he’d just be one season wonder wrong. Leading Totenham’s impressive attacking moves, Kane has scored 22 goals this season and is only two goals away from leading striker, Romelu Lukaku.

Is there anything left to be said about the pocket-sized French engine who doesn’t stop running from the first to the last minute? 26-year-old Kante has already won the PFA Players’ Player of the Season award, and is one of the favourites for Player of the season.

The current leading scorer of the Premier league, the Belgian striker has dominated the chart from the beginning of the season with 24 goals to his name. Lukaku has recently struggled to find his form, scoring just three in the last eight games.

The best player this season for Arsenal, Alexis has lead his team to victories, and Arsenal fans can be very grateful for Chilean as without him their club would not be challenging for Champions League football. The 28-year-old has made 36 appearances, scoring 21 goals and making 11 assists – the first player of the season to reach double figures in both goals and assists. 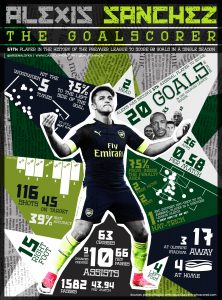 The 30-year-old Belgian has put in some crucial performances for Totenham this season. He provided stability for his team at the back, and is one of the main players in the team. Vertonghen has collected 31 appearances, and Spurs have the highest number of clean sheets so far – 17 – one more than Chelsea and two more than Manchester United.