Arsene Wenger’s decision to adopt a back three paid dividends as The Gunners were able to overcome Manchester City in extra time at Wembley and advance to yet another FA Cup Final.

Pep Guardiola’s side played better than they had against other teams to confront them with a back three this season, but were for the most part contained well by Arsenal’s new tactical innovation.

When you stop innovating, you stagnate. Someone else will come along either with a new idea, or a better way of executing an established idea, and they’ll overtake you and leave you behind.

Over the past few seasons, an increased focus on tactical innovation and the development of tight, functioning systems greater than the sum of their component parts has helped give smaller clubs a competitive advantage and enabled them to them frustrate loose collectives of more talented individuals.

Seeing the likes of Everton, Southampton, West Brom, and Crystal Palace earn upset wins over the traditional established elite is still a surprise, but not so much of a shock as it once was.

This season, the two clubs at the top of the league endured indifferent starts to the season, but have come on leaps and bounds since the adoption of a three centre-back system that they trialled for the first time in trips to play Arsenal.

After 55 minutes of being systematically torn apart and having every single one of their flaws exposed by a rampant Arsenal at the Emirates in September, Antonio Conte switched to a back three. Since then, he quickly drilled his team into one of the best collective units in the country. The collective security of the system minimises the individual flaws of defenders. Everyone looks after each other.

However, not all clubs take as well to a new system as well or as quickly as Chelsea did.

When Spurs first trialled their back-three system in November’s North London Derby, they had a few teething problems and Arsenal got a lot of joy with balls down the side of Eric Dier, drawing him out into the channel and forcing him into areas he wasn’t fully comfortable with.

Going into Sunday’s FA Cup Semi final, you would have been forgiven for thinking that this was to be a worry for the inexperienced Rob Holding and the often-maligned Gabriel against the prodigious Leroy Sané and Raheem Sterling.

However, that wasn’t to be the case and both were excellent throughout containing City’s threat.

While both Holding and Gabriel thoroughly deserve to be singled out for individual praise, you also need to acknowledge that their performances were facilitated by the system and every Arsenal player’s execution of the defensive duties they were assigned.

Everyone looked after one another.

City looked to use Sané to target the space in behind Alex Oxlade-Chamberlain. They got in a couple of times in the first half, but as Arsenal grew into the game, partly due to Gabriel’s imperious performance, they were kept at bay.

While City may have looked to target the Ox’s individual shortcomings in defence, they were not adequately prepared for what he’d offer going the other way.

As against Middlesbrough, the Ox’s deeper starting position worked greatly to his and Arsenal’s advantage. He picked the ball up deeper, enabling him to use his dribbling more strategically and effectively.

One criticism of his game is that he dribbles down blind alleys.

In the build-up to the equaliser, he looked up three separate times, anticipated the runs his teammates would make, before making an informed decision to cross to the back post.

As had been the case the last time Arsenal played opposition from Manchester in the FA Cup, Arsenal’s first goal came through the Ox setting up Nacho Monreal.

He timed his run into the box perfectly and showed fantastic poise in calmly slotting a volley with his weaker foot at Claudio Bravo’s near post.

Monreal’s goal was facilitated by the attacking run of Aaron Ramsey, who turned in another characteristically excellent display at Wembley. Ramsey’s put Jesus Navas in two minds over which Arsenal player to cover. 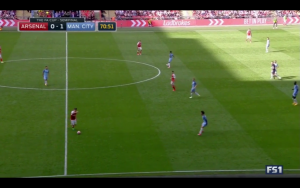 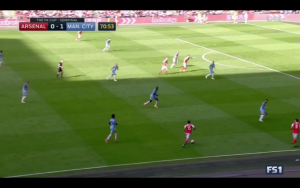 As the move starts, Navas is fully aware of where Monreal is. He is very much his man. However, as the move develops, he sees Ramsey.

Due to the timing of Ramsey’s run into the box and the poor organisation of City’s centre backs, Navas gets pulled in, leaving Monreal free at the back post. 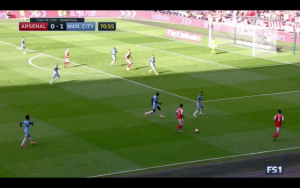 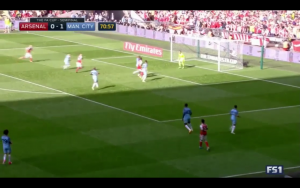 Alongside Ramsey in midfield was Granit Xhaka, who turned in a mature performance on the big stage.

He’s been rightly criticised this season for being too overzealous in some of his tackles when he needs to break up play, giving the referee no other option than to produce a card. On Sunday, he was far more subtle about it.

His predecessor, Mikel Arteta, would have thoroughly approved of some of the nuanced dark arts on display.

When you’re trying to protect an unfamiliar defence, the importance of breaking up play high up the pitch and giving them a breather cannot be understated. You have to do it, and it was good to see Xhaka do it in a way where the referee didn’t feel compelled to book him for his first one.

While Arsenal’s focus will rightly be mainly on winning a one-off game against Chelsea for the cup, the possibility of retaining Champions League football for next season has once again become a real possibility after Liverpool’s home defeat to Palace.

Eight games is a small sample size for teams to work out an opponent’s systems soft spots.

Perhaps this back three will help Arsenal achieve yet another springtime salvage job.

Maybe we’ll be sitting here at the end of May looking back on the season and thinking Mr Wenger has done it again!