Arsenal broke their Premier League losing streak with a well-earned point in what transpired to be a strange tactical battle against Pep Guardiola’s Manchester City.

Traditionally, one expects teams to feel their way into a big game, with a measured but not tentative start, looking to still be level after 20 minutes before settling in to their gameplans, gradually upping the ante. The match may close with a scintillating final 10-15 minutes if one or both sides are searching for a goal.

This was not the case at all in Sunday’s 2-2 draw.

The first half was categorised by periods of intensity, while the second featured large swathes of action where neither team looked particularly interested in trying to force the issue.

City were quick to impose themselves on the game, settling into their gameplan immediately. Guaridola looked to use both wide players, Raheem Sterling and Leroy Sane, as his main weapons. They were instructed to stay high up the pitch to stretch play, keep Arsenal’s fullbacks honest, offer a threat in behind, and look to capitalise on Arsenal’s structural flaws in their shape without the ball.

While Guardiola has rightly forged a reputation for his focus on patiently building from the back, his City side are also adept at going direct. It was noticeable from goal kicks that Sergio Aguero, who regularly plays on the last line, was dropping off into midfield looking to control the ball and play it back to one of the central midfielders, who would in turn play it forward for one of City’s wide players, making a darting run between fullback and centre back into the space vacated by Aguero.

After 3 minutes and 7 seconds, David Ospina rushed out attempting to clear a Fernandinho through ball intended for Sterling, only for the ball to collide against the City player before fortuitously going wide. Arsenal had been duly warned that City would look to use Aguero to draw men out, before utilising a central midfielder to play a telling pass for a wide player making inroads. 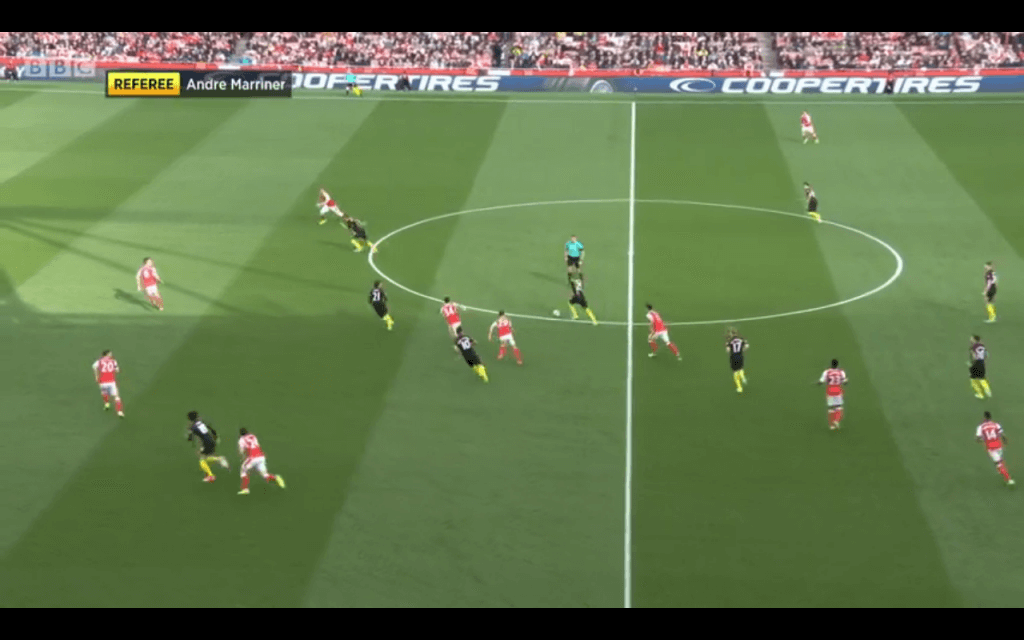 From the ensuing restart, Arsenal themselves fashioned an opportunity, after neat, incisive build-up play from Xhaka, Özil, and Alexis resulted in Otamendi making a complete mess of a ball intended for Welbeck, before Clichy smashed the ball against the striker only for it to fall narrowly wide.

Once again from the ensuing re-start, City created another opening in the same fashion as their first, this time with Kevin De Bruyne playing the through ball to Sane on the opposite flank. This time, Arsenal weren’t so lucky and City went 1-0 up. 75 seconds separated these three incidents.

The situation for City’s first goal came about because of Arsenal’s poor shape without the ball and lack of compactness, which was absolutely criminal so early in the game with the scores level.

Mustafi made a mistake in charging out of defence to win a header against Aguero, a duel that neither the Argentine nor his manager would have been overly concerned with losing, given the gap that opened up as a result of Mustafi leaving his post. However, Mustafi would not have needed to step out into midfield and contest the header had Coquelin and Xhaka been appropriately positioned in the first place. 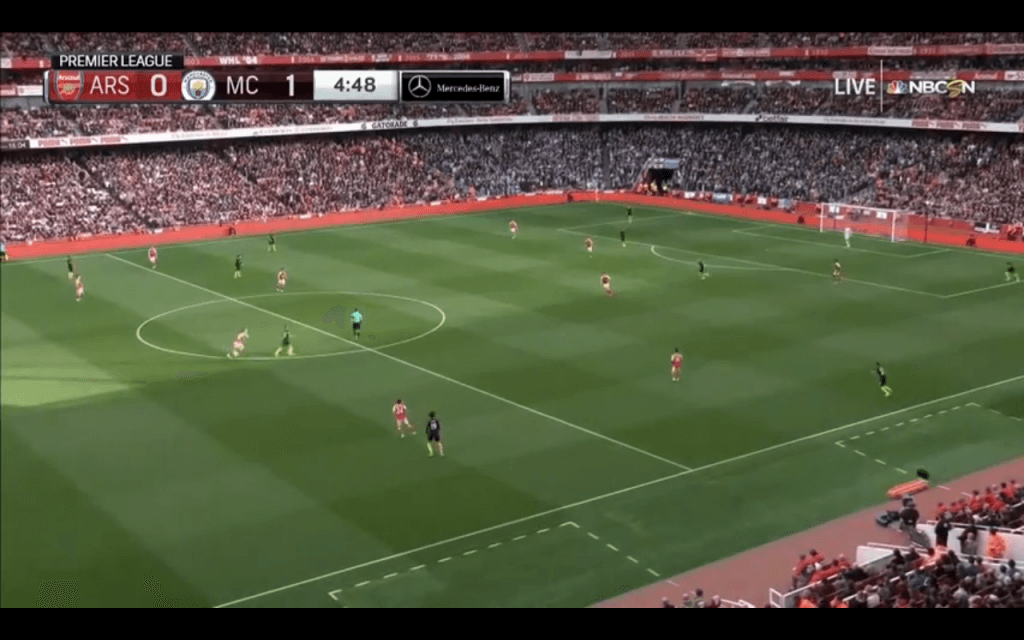 While a manager as laissez-faire as Arsene Wenger will never impose Arrigo Sacchi-like edicts on his team to not leave more than 25 metres between defence and attack, he shouldn’t need to. The players should have enough common sense to have figured out that they were far too stretched, for no good reason, especially so soon after getting off with a warning from the Sterling chance just over a minute earlier. Neither of the midfielders had been upfield for the Welbeck chance and had no excuse for being so high up the pitch and not alerting their partner.

After going 1-0 down, Arsenal looked understandably shaky for 20 minutes, with City looking the more likely to score the next goal but without overtly going for the jugular. Xhaka and Coquelin were overrun in the midfield by Fernandinho, De Bruyne, and the floating David Silva. Their jobs were made even more difficult when they picked up thoroughly avoidable bookings. With the pace of City’s front three, they could have really punished Arsenal on the counter, knowing that neither of Arsenal’s midfield pair could risk mistiming a tackle, but they didn’t test them as often as they should have.

After riding the waves of City pressure and surviving some scares, Arsenal started to make serious inroads down the left, creating openings through good combination play by Monreal, Özil, and Alexis, capitalising on Guaridola’s decision to play winger Jesus Navas at right back. Navas himself was on a yellow card, and fortunate to still be on the pitch at all after a horrendous lunge at Monreal’s shin early on.

Arsenal focused 44% of their attacks down his wing, compared to 29% down the right and 27% through the middle. They’d identified a weak spot and they sought to exploit it, although some would argue 44% still wasn’t enough given Navas looked out of his depth and was on a booking. When Arsenal equalised after Theo Walcott once again scored in a big game, you felt it had very much been coming.

Having equalised, however, Arsenal failed to see the match through to half time on level terms. City had two good chances within a minute of the restart. Although the first was kept out, Aguero made no mistake and calmly slotted the second a matter of seconds later. The defence had once again been left unprotected by Xhaka and Coquelin, who hadn’t switched back ‘on’ yet after the break in play for the equaliser, perhaps demonstrating a lack of concentration and awareness.

Given the manner of the two goals conceded and the news that Laurent Koscielny’s Achilles would prevent him from playing in the second half, some fans feared the worst, based on the lack of midfield protection for the defence and Arsenal’s performance in both Bayern Munich games when the Frenchman could no longer continue.

His replacement, Gabriel, looked immediately shaky, underselling Ospina on a backpass 30 seconds in to the half, and then fully lost Aguero for a free header a few minutes later. But he grew into the game and gave his best performance since the second half of the 0-0 draw with Liverpool in 2015. He made 8 successful clearances. 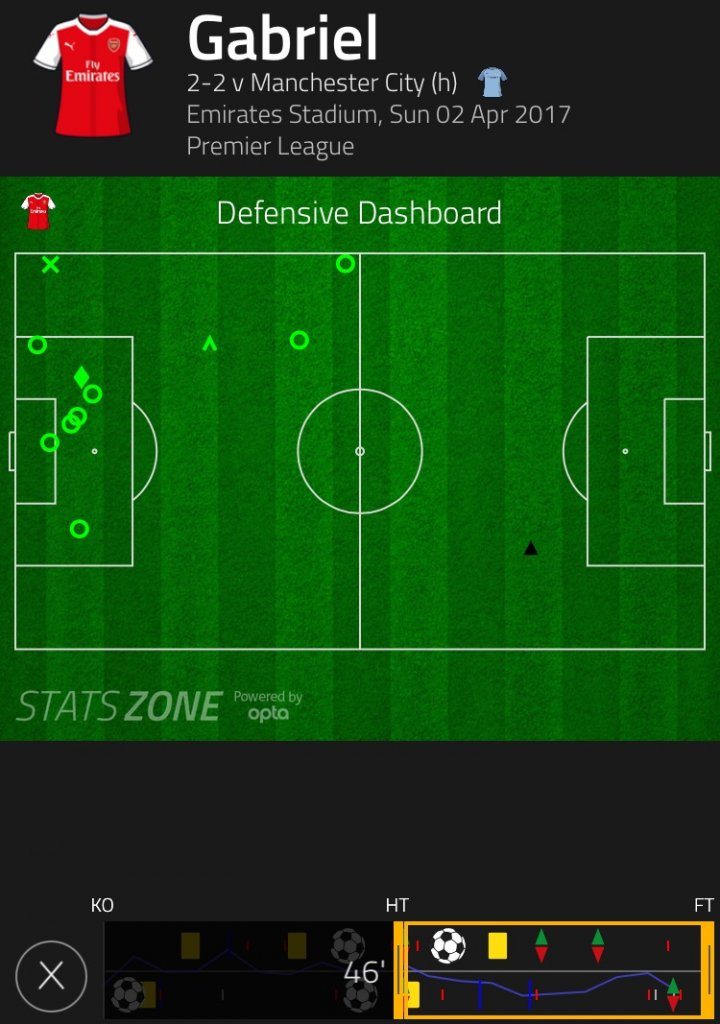 After Arsenal’s second equaliser through Mustafi, a game that had previously seen both sides enjoy spells of sustained pressure quickly became more disjointed and scrappy. Both teams had opportunities, but neither put the opposition’s goal under siege.

The tempo slowed significantly and both teams fell into a mindset where this became a game they did not want to lose, more than one they felt compelled to try to win. For an Arsenal team on such a bad run, this was not necessarily a bad thing.

Both sides will go again at Wembley in three weeks, with each feeling confident that they have learned enough about their opponent’s flaws and have enough about them to capitalise upon them.