With Sead Kolasinac’s transfer to Arsenal looking imminent, here’s what we know so far.

Last week, a Bosnian media outlet revealed that Kolasinac was signing for Arsenal.

The story so far

The Schalke left-back’s contract with the German club is over in the summer, which means that not only would Arsenal, who have been linked with him since 2015, be able get him for free, they can agree a deal and announce it now.

Schalke currently aren’t doing too well in the Bundesliga. They’re down in 11th with the management blaming their poor results on the team and a few of their top players are said to be jumping ship this summer.

Arsenal were linked with Kolasinac back in January, as were Juventus and Chelsea, but obviously a deal never materialised.

Fast forward to April and Kolasinac, who’s set to become Nacho Monreal’s replacement, has reportedly signed for Arsenal, according to the Bosnian press.

The player was then said to be in London, completing the deal having being ‘snatched’ from  Everton.

His father swiftly came out to deny the claims that he had signed anything, but confirmed that both Arsenal and AC Milan were possible destinations for his son. He also said that everything would be sorted ‘next’ week, which is now this week.

During Arsene Wenger’s press conference ahead of Arsenal’s FA Cup clash against Manchester City at Wembley, the manager was asked about Kolasinac. He said he could deny that story at the moment because nothing had been concluded. He then flashed his trademark smirk. 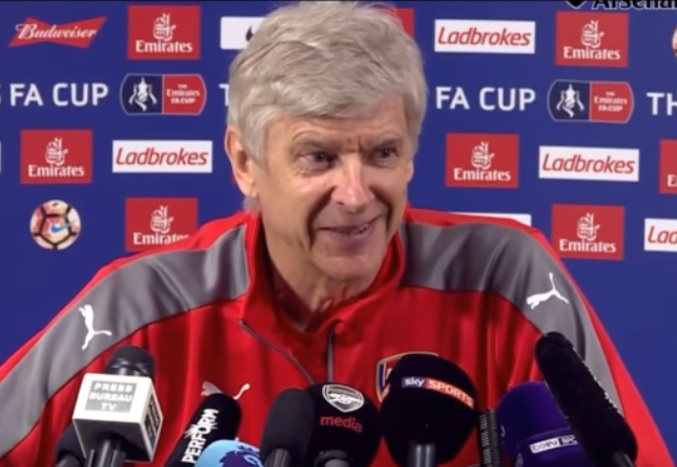 Shortly after, a post on his quotes went up on Arsenal.com, which was then quickly taken down.

Hours later, Goal.com reported that the deal was basically done. When the player was supposedly in London a couple of weeks ago for a sponsorship event, he apparently had his medical and agree personal terms.

At the moment of writing, there has been no official confirmation or further development.

Is he any good?

Despite being injury-prone, Schalke fans are pretty annoyed that they’re going to lose their ‘Bosnian Hulk’ for free. He’s big and a bit nasty. Exactly what people have been saying Arsenal need for years.

The no-nonsense left-back, known for his physical approach, managed to nab two gorgeous during Schalke’s Europa League quarter-final match against Ajax on Thursday night. They were his eighth and ninth of the season.

You know it's a good assist when your teammates celebrate with you rather than the goalscorer… Sead Kolašinac 👏 https://t.co/DHrOPbUiKu

When you consider that Monreal, who’s set to return to Spain this summer, has only managed two assists this season over all competitions, you begin to get an idea of what Kolasinac could bring to this Arsenal side.

For more on why the left-back could be brilliant for the Gunners, read here.