Mesut Ozil’s teacher knew that he was something special from the first time he saw him on the playground.

“He had just come to our school from the primary school,” Christian Krabbe told Four Four Two. “We had eight classes in each school year and we had a tournament between the class teams, to see if there were some good kids for the school team.

“He was absolutely fantastic.

“Whenever he had the ball, he just drove through the back four and then gave the ball to someone else so they could score. He didn’t score goals; he assisted them.

“Even at that age, he had an overview – he could read exactly what was going on.

Watching videos of him playing as a youngster and you notice he has the same, languid style that he carries today. This has always been his way.

It has served him well.

Before he arrived at Arsenal, he’d won the DFB-Pokal, La Liga Copa Del Rey, Supercopa de Espana, the World Cup, u21 Euros, German Player of the Year 2011, 2012 (and 2013, 2015 and 2016 after arriving), Bundesliga Top Assists 09/10, World Cup Top Assists, World Cup Golden Ball nominee, World Cup Man of the Match, Champions League Top Assists, and places on the UEFA European Championship Team of the Tournament and UEFA Team of the Year.

Clearly he was doing something right, somewhere.

In England, they don’t take too well to that sort of thing.

How can you be any good if you aren’t tearing up the pitch?

They like their football loud and their footballers a little bit crazy. They want a player who will ‘run through a brick wall’ for you without stopping to ask just what the point of that is.

What does it prove?

“If it doesn’t make sense to run somewhere he will keep that power for the next run,” Ozil’s agent, Dr Erkut Sogut said.

When you run more than 10km in a match, as Mesut often does, that’s a sensible strategy.

“He is not someone who runs around aimlessly and tackles just so everyone thinks he is fighting.”

If he was, we wouldn’t be having this discussion.

This season, Ozil’s assist tally has been badly dented. It’s not that he isn’t creating the chances – he is. It’s that his teammates are not converting them.

Arsenal have created 305 chances in the Premier League this season. Mesut Ozil is responsible for 59 of them – 20%. For his creativity, his teammates have rewarded him by converting just four of those chances.

For comparison, Philippe Coutinho has created 47, Eden Hazard 54, Juan Mata 40, and David Silva 59. He’s more than doing the job he’s paid for at the same level as his main rivals, at the very least.

But the media want more.

They want a player who helps his side defensively, despite being required to be the one who adds the final, gilded touch to any forward move.

Ozil doesn’t do that, right? 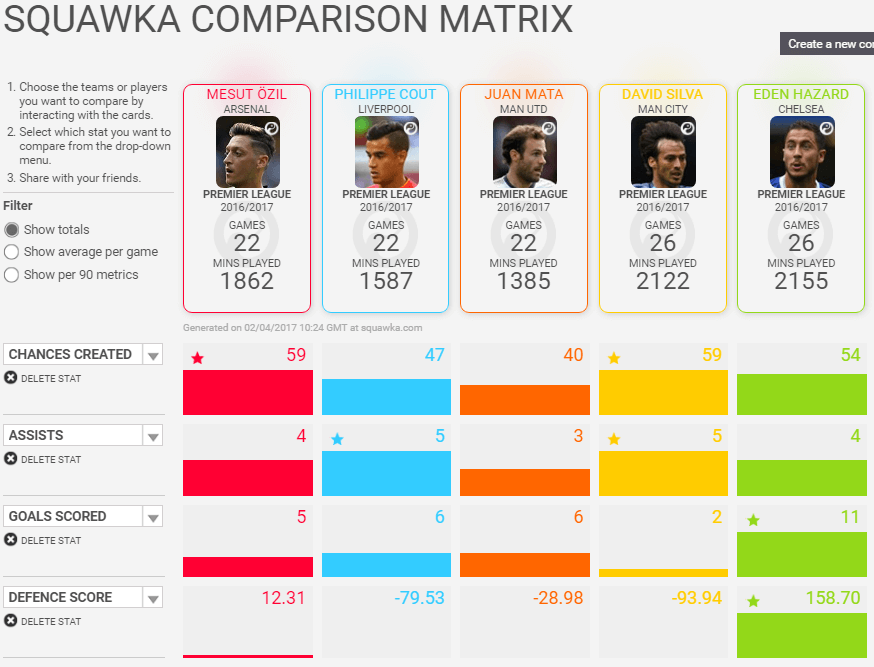 The media in England like tangibles. They like things they can count. Goals and assists, really. And cleansheets.

After that, most of them aren’t really bothered about expanding football beyond its most basic form – goals in the holes.

Ozil on a football pitch is an intangible

Watching him in the flesh compared to on TV is something that delivers you to a whole different realm of respect for what he does when the camera isn’t on him.

When the camera isn’t on him.

If pundits don’t see it, it doesn’t count, therefore he must be doing nothing, right?

The problem isn’t with Mesut Ozil, and it never has been, although his form has been off somewhat over the past few months.

The problem lies in the people who stand between Mesut Ozil and the watching public – the media, and how they convey him to that public.

If you highlight someone’s perceived flaws for long enough, that will be all people see.

Not only is Mesut misunderstood, he’s woefully misrepresented by the people who are paid handsomely to explain this game to us.

He’s punished for their ignorance and preference for hyperbole.

He is being made a scapegoat, mostly by a media determined to see him fail from the moment Arsenal finally parted with a substantial amount of cash for him in 2013.

And when he finally leaves Arsenal?

They’ll all tell us how he was too good for us anyway.