Alexis Sanchez is the 8th best dribbler in the top five leagues across Europe.

The Arsenal man, who scored the winner against City on Sunday at Wembley, finished that match with just the three dribbles – 50% less than Alex Oxlade-Chamberlain, and even one fewer than Rob Holding, but his success across the rest of the season sees him included in the CIES Top 100 Dribblers in Europe.

“The dribbling index is calculated by dividing the number of dribbles attempted by the percentage of successful ones,” CIES explain. “This allows us taking into account dribbling skills from both a quantitative and a qualitative perspective.”

It’s a surprising list, not least for the player who tops it… 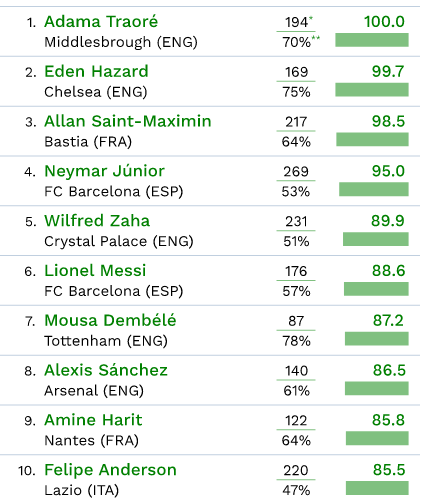 Arsenal request international side don’t call their player up