Gabriel was once again started at right-back while Hector Bellerin was rested on the bench on Tuesday against Watford and proved once and for all that he is not a full-back.

The Brazilian wasn’t THAT horrific, seeing as Arsenal’s whole back line against the Hornets played laughably. He tried his best. However, going forward he offers very little. This is particularly noticeable when we have a right-back like Bellerin at the club, who is a huge part of the Gunners’ attack, both in build-up play and on the counter.

Against Watford, Gabriel only completed 34/46 passes. That’s a pass completion rate of 74%. Now, when you look at Bellerin’s stats, he has an average pass success rate of 85%. This accuracy is huge when it comes to launching attacks and getting the ball to our forwards.

What’s more is, if you look at the type of passes Gabriel was unable to make successfully, the majority were forward. The ones that he could pull off were mainly sideways or backwards. Not ideal for an Arsenal full-back who should be desperate to get the ball to our big target man, Olivier Giroud, who had next to no service all evening. 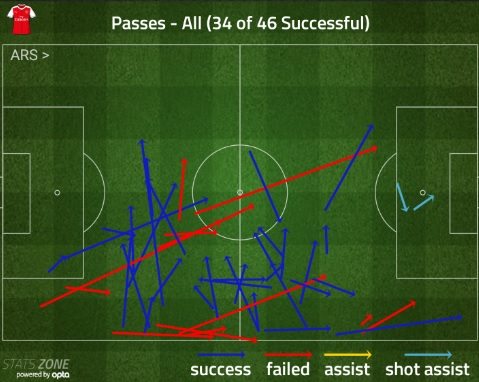 As you can see, Gabriel made 8/12 passes in the final third but hardly any were genuinely threatening and the ones that perhaps were didn’t come off.

On the flip side, he completed the most tackles out of any Arsenal player (5/7), although that doesn’t say a lot considering how shocking we were in the first half. He also made three interceptions – the same as Watford goalscorer, Troy Deeney – and made five successful clearances.

All in all, a forgettable game for Gabriel.