Despite the odd slip-up, Shkodran Mustafi has been a decent acquisition this season but against Watford he had a shocker.

The centreback was one of Arsenal’s stand-out players for all the wrong reasons on Tuesday night as the Gunners lost 2-1 at home to the Hornets.

Although Aaron Ramsey blamed for Watford’s first goal, since the freekick deflected off him, the second was the product of horrific defending from some of our most solid players.

Poor control from Ramsey after a Gabriel throw in left Étienne Capoue running on goal one-on-one with Mustafi, who just continued to back off and back off, allowing the Watford man to simply brush him aside and cross the ball to Troy Deeney, who simply had to pass the ball into the back of the net. Although no one picked up Deeney and Nacho Monreal appeared to be asleep as he made his run, Mustafi should never have let Capoue get that far.

Mustafi is usually a passmaster but against Watford, he only managed 58/75. Laurent Koscielny actually completed the most: 70/79. What’s more is that if you look at the German’s pass map, the passes he couldn’t seem to complete were mainly forward, which is unusual for the 24-year-old who usually adds an attacking threat as well as reasonable defensive stability. 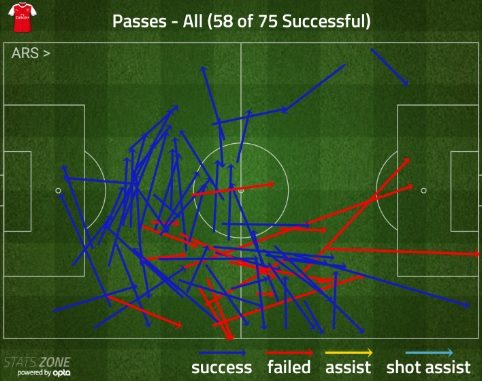 The former Valencia defender only completed 2/3 tackles and made no interceptions. Although, he did make the most clearances out of any other Arsenal player – eight – and won 9/15 aerial duels.

It wasn’t a great day at the office for Mustafi, nor was it for any of the defence. Hopefully, this poor performance is just a blip. Otherwise, our game against Chelsea at Stamford Bridge is going to get embarrassing pretty quickly.