Following our first player feature last week with Kelly Smith, this week I will speak about one of our young talents who is likely to become a starter soon.

Eagle-eyed fans on social media will have noticed that Taylor has been given her own space in the Arsenal Ladies hub and is therefore is now recognised as a first-team player. 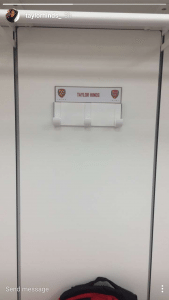 Anyone who has seen the Ladies left-back play for the Arsenal ladies u17, development team or with England u17 at the World Cup or currently the u19 team knows she clearly represents the future of the club.

She will certainly compete with Emma Mitchell for a starting place in the team in September, unless she chooses to go studying in the USA like many girls who played at the u17 World Cup are likely to do as many were inundated with offers from US college last year.

The US pathway is good one combining studies and football.  Ashleigh Prumptre has recently won the NCAA title with USC while Lucy Bronze also won it with UNC. Former Ladies reserves captain, Fran Steele, currently studies at Yale University.

What makes Taylor a player with high potential?

She is a left-footed player, quite quick with and without the ball. This is something that is crucial in modern football, as a lot is being asked from the full-backs to go up and down the wing with repetitive, explosive sprints.

Transition from defending to attacking makes players who excel in the counter-attacking game a premium in the days of tight and compact defensive blocks.

Taylor has all those ingredients and she can also break line, going through the opposition team while beating defenders on the run. She is also an excellent reader of the game in defensive situations.

Let’s hope Taylor will make the step to the first team soon and carry on working hard to be an essential part of the team for the next five to ten years.