With Claudio Bravo facing plenty of criticism as a result of his poor goalkeeping displays recently, questions have been asked about the level of performance from those in between the posts.

Statistics have been brought up to show exactly who the best and worst performing goalkeepers are this term.

Petr Cech has been questioned about his lack of consistent form for Arsenal this season, having conceded a number of soft goals from all types of angles, where you would naturally expect a goalkeeper of his quality to save attackers’ efforts on goal. Examples include matches against Manchester City and Bournemouth but reassuringly, he doesn’t feature in the bottom 10 when it comes to lowest save percentages (10 appearances or more). Liverpool’s Loris Karius, Bravo at City and Crystal Palace’s Wayne Hennessey are all there with 58 goals conceded between the trio.

In research conducted by global football agency World in Motion, they’ve compiled a detailed study of each goalkeeper’s performances this season, not only looking at the goals they concede, but how they respond to a shot on target (e.g. was it held at the first attempt, parried dangerously) and the difficulty of each shot faced.

In terms of shot response quality, Petr Cech ranks third on a list of seven goalkeepers from the Premier League’s top six clubs. Tottenham’s Hugo Lloris and Manchester United goalkeeper David de Gea are unsurprisingly ahead of the 34-year-old in that regard, considering they’ve been consistent performers for their respective sides this term and also boast better reflexes than their older counterpart.

However what is more interesting is how they rank shot difficulty, and how only the aforementioned Bravo and Lloris have faced easier shots across the Premier League campaign than Cech in comparison to the rest of the league’s top six sides. With that in mind, you’d expect him to have one of the best shot-stopping ratings but this is not the case.

In-fact, he has a relatively average 61% which isn’t a major problem but could easily be seen as one if he continues to struggle when attempting to make saves from easier efforts on his goal. 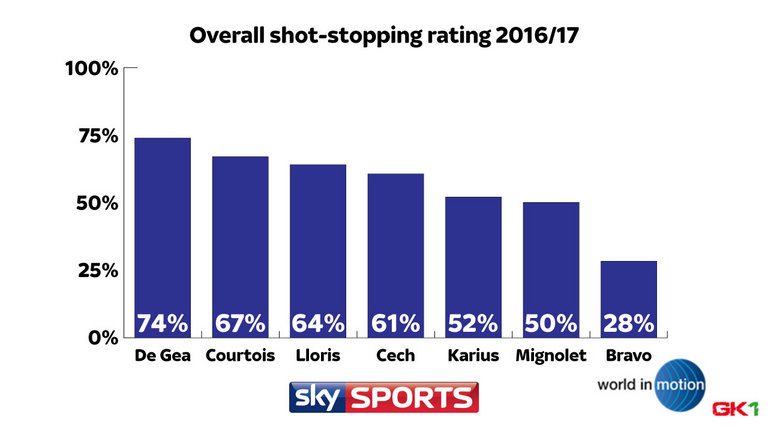 He joined Arsenal, his leadership qualities and world-class ability were unquestioned upon arrival. As his second season in north London has progressed, he has made more memorable errors leading to goals and it’s clear that he’s struggling to reach the same levels of consistency he was performing regularly in previous seasons.

In terms of shot-stopping ability, Cech is still one of the best in the league. Gradually though, his importance to the team is lessening slightly in comparison to the likes of Hugo Lloris, Thibaut Courtois and David de Gea: all of which have been reliable when called upon to help their teammates avoid tricky predicaments in the defensive third.

Gabriel Magalhaes included in Team of the Week

Martin Odegaard: “I am really excited to be part of this club”

Crowd trouble between Arsenal and Burnley fans to be investigated

Alexis Sanchez told he can leave Inter Milan for free

Cowley: Azeez will be a top player despite tricky debut