As usual, Alexis Sanchez was brilliant for Arsenal during their 4-0 win away to Swansea on Saturday but there was a downside to his afternoon.

The Chilean scored again – his 14th Premier League goal this season – and didn’t stop working from start to finish. However, it was the finish that was a little disappointing and not for his on-the-pitch behaviour.

When Alexis was subbed off in the 79th minute to make way for Danny Welbeck, who’s only just returning to fitness after being sidelined with a knee injury since May, the 28-year-old didn’t just strop off the pitch: he sat down sulking with his coat over his head. Like a child.

Image: Alexis Sanchez on the bench after being taken off. #afc pic.twitter.com/oiBAYH5KCY

Now, while I admire passion and believe many of our squad could follow in Alexis’ footsteps to a degree, this kind of behaviour shouldn’t be allowed. Not only does it appear that he begrudges his teammate, who’s trying to regain fitness after a long-term injury, game time, but it also undermines Arsene Wenger’s decision to take him off in the first place. Wenger is his boss and no player should be sulking because of a choice he’s made, at least not so publicly.

Many argue that this is just how Alexis is, and if he wasn’t, he wouldn’t be the world class forward we know and love but I highly doubt growing up is going to take away his passion on the pitch.

Just looking at his stats from the 4-0 win over Swansea paints a picture of how he plays.

He had four shots in total – more than any other player – two of which were on target and one found the back of the net. He only completed 28/43 passes. However, in the final attacking third, he completed 16/29. Although his pass accuracy could be improved, it shows his intention is always to get forward; he’s always looking to score or help someone else do so. 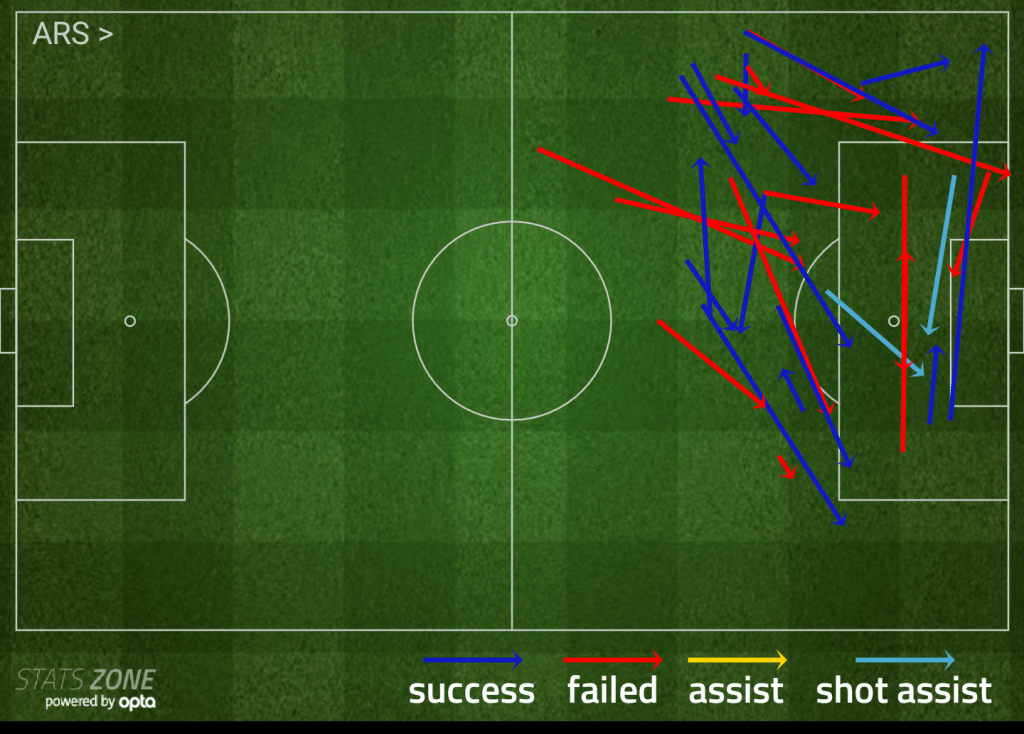 Just look at his passes in the final third.

More or less all forward or across the face of goal. The man is a machine, there’s no doubt about it, but he needs to work on his attitude or Wenger needs to start dishing out punishments.