After Gabriel had a surprisingly successful spell at right-back in place of the injured Hector Bellerin, he appears to have improved at centreback as well.

When most people heard that the Brazilian would be temporarily replacing Bellerin, who missed out on a few games recently due to an ankle injury he picked up against Spurs, they groaned.

However, while he didn’t have anywhere near our 21-year-old Spaniard’s vision or speed, he was reasonably solid.

Now that Bellerin has returned and Shkodran Mustafi promptly did his hamstring, Gabriel has been moved back to his preferred position and, despite Arsenal’s 2-1 loss against Everton, he wasn’t too bad. 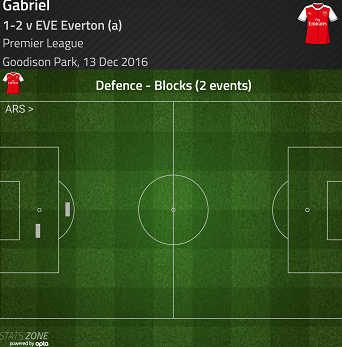 The defender made two crucial blocks, more than any other player on the pitch, and completed six out of six clearances, second only to Laurent Koscielny who completed nine out of nine.

Not bad at all.

Although Mustafi won’t have any trouble being reintroduced to the side after he’s recovered, it’s good to see that Gabriel is proving to be a viable option.

Silver linings and all that.