With the move from a summer season to a winter one following an FA review, there will be a one-off nine-game League designed to bridge the season that just finished and the next one starting in September 2017.

There is nothing wrong with that as players need game time. They cannot really just be idle between November 2016 and pre-season for 2017/18 that should start around July.

There is the potential option to go on loan for FA WPL players, an option that was chosen by players from FA WSL 2 division.

But for most of the FA WSL players, their next official games will be in 2017 and is likely to be in the FA Women’s Cup.

I have mapped out the half-season from January to August 2017 with all the current information available and you really wonder how the FA decided to have the starting dates for the Spring Series as they did: 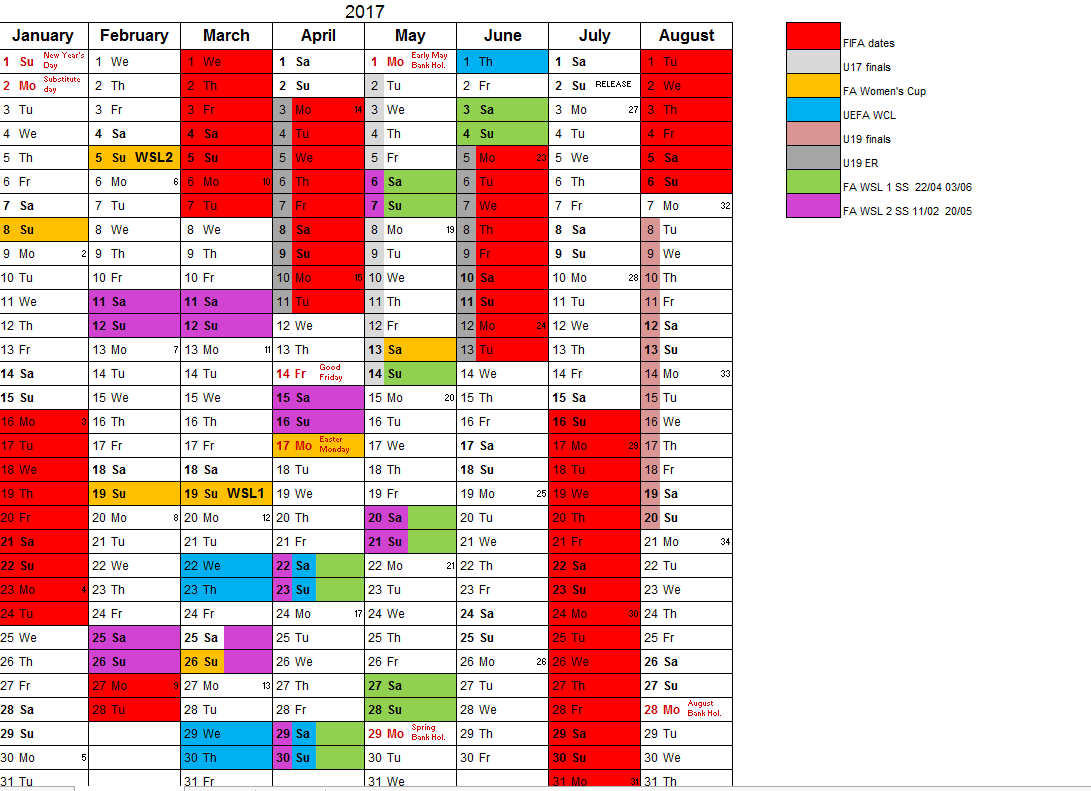 The FA WSL 2 Spring Series will be played from 11th February to 20th May. It’s all good for those teams, you can easily find nine weekends in that period for teams to play their games.

It’s quite a simple schedule so well done to the FA.

The FA WSL 2 teams will enter the FA Women’s Cup the week before they start the Spring Series, as will the FA WSL 1 teams.

You do wonder if the FA is doing this (like every season) to give a handicap to the FA WSL teams by having their first competitive game as a potential cup banana skin. I mean, this would be done to balance the fact that those teams come so late into the tournament and have a huge advantage.

We can all remember the Notts County Ladies player’s ludicrous comment prior to the first ever FA Women’s Cup final (under the new regime) played at Wembley. “We are now a big team, as we have reached the final,” she said.

On the way to the final they beat Spurs from the FA WPL Southern (3rd level), Aston Villa and Everton, both FA WSL2 teams. So it was quite a ridiculous situation to reach the FA Women’s Cup final without playing a top team. At least they duly lost the final against the first top division opposition they met in Chelsea Ladies.

Regarding the FA WSL 1 teams, their Spring Series will start on 22nd April,  more than two months after the FA WSL 2 teams and a full month after they enter the FA Women’s Cup on 19th March in Round 5.

It simply does not make sense to compress the schedule so much.

There are only seven available weekends between 22nd April and 3rd June which means at least two midweek games. Then, you add the Champions League in the mix as well.

Luckily enough for the FA, Chelsea Ladies were defeated in the first round by recent runner-up Wolfsburg and therefore only Manchester City will see their scheduling disrupted.

Note that City’s only competitive game prior to the Champions League quarter-final against Fortuna Hjorring will be the FA Cup Round 5 tie, three or four days before the European competition. With City lucky enough to have an easy draw, they are favourites to reach the WCL semi-finals to be played on 22/23 April and 29/30 April. Those dates are likely to be Matchday 1 & 2 of the Spring Series. Therefore further disruption is expected, and you bet some people are praying for an upset and for City to go out in the quarter-finals to leave the fixtures list as it is now.

There is no doubt the Spring Series is engineered to help England do well at the 2017 Euros in Holland. The official release date for players prior to the tournament is 2nd July and the players are finished by 3rd June, so that England have an extra month to prepare for the tournament.

Had the Spring Series finished two weeks later, on 18th June for example, the nine game-stretch would not have been so compressed and it could actually put the players at risk of injury so close to the Euros.

It will be interesting to see how things turn out for the England players and who will miss out on the tournament because of fitness issues.