The FA has finally uploaded the players’ list on their website, so we now have a good idea of the players registered to play for the Arsenal reserves this season. 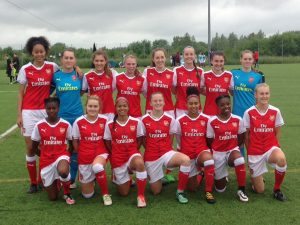 Taylor Hinds, left-back (u17 and reserves)

Anna Patten, right-back (u17 and reserves)

That is a small squad of 14 players only.

Evie Clarke is also listed but she is now a regular with London Bees in FA WSL 2, so it is probably a mistake by the FA.

It means the player’s registration is not fully entered in the FA Full-Time website as the kick-off for the Development team season is 15 days away.

As seen in the team picture above, there are two players that are not listed, yet, on the FA website.