Arsene Wenger has hailed Arsenal’s 3-1 win over Chivas Guadalajara in the early hours of Monday morning as the ‘ideal preparation’ ahead of the new season.

Post-match, the Arsenal.com site seemed to be completely asleep. With no match report until this morning, they had the result down as 3-2 with Chivas scoring two penalties in the 74th minute (it was only one), and somebody asked Arsene Wenger what it means to start pre-season with three wins, completely forgetting that they drew 1-1 with Lens in the first game. I shouldn’t complain, really, the time difference totally bamboozled me and I thought the game was tonight/tomorrow morning.

Anyway, if, like all of us here at Daily Cannon, you were asleep for the game, here are the goals which came via Rob Holding, Alex Oxlade-Chamberlain and Chuba Akpom:

Speaking after the match, the boss said about the win, “It was an ideal game against a very determined Chivas. Overall I think it was interesting for us because we needed to be patient as they started better than us.

“After 20 minutes we came into the game and we got a comfortable win in the end. It was very interesting to see some young players – we had a very young defence. Overall it was a positive experience for us.”

About new boy, Rob Holding, he added, ”I am impressed by his performances and by his capacity to adapt very quickly to a higher level.

“He shows intelligence, composure, character and it’s impressive. You do not see that often.” 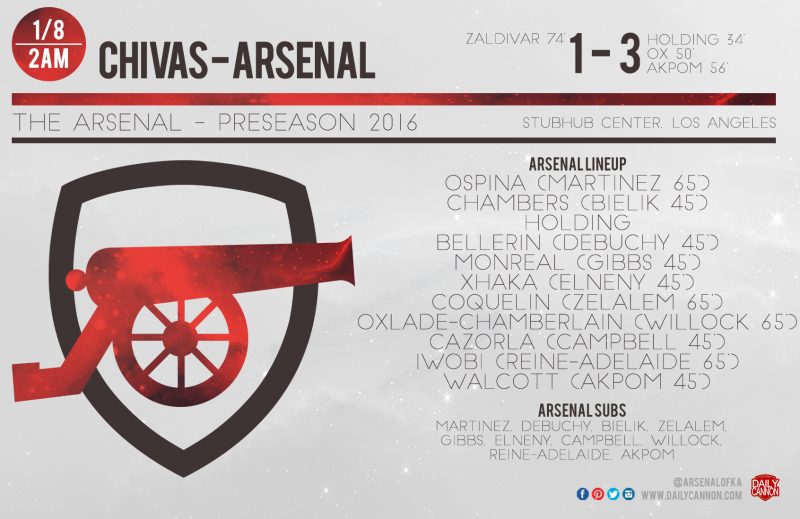